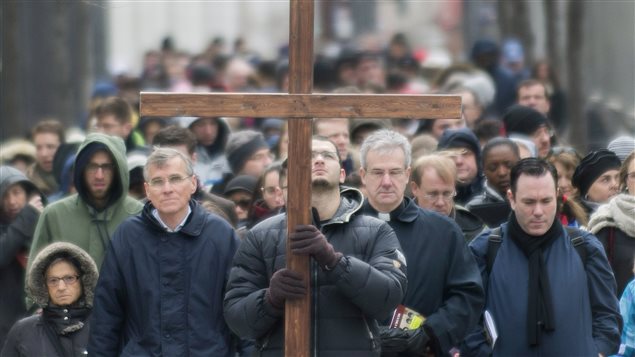 A man walks with a crucifix along with the faithful as they participate in the Way of the Cross on Good Friday in Montreal, April 18, 2014. (Graham Hughes/THE CANADIAN PRESS)

Canadians divided over the role of religion: poll

While the majority of Canadians profess some belief in God or a higher power, nearly a third would like to see Canada become a more secular nation, according to a new public opinion poll.

The study by the Angus Reid Institute, conducted in partnership with the Christian think-tank Cardus, found that six-in-ten Canadians say that freedom of religion makes Canada a better country. One-in-ten Canadians think the opposite.

The study found that nearly half of Canadians feel that faith communities make an impact that is mixed, both good and bad in different instances, while three-in-ten say the influence of these groups is more good than bad overall.

Asked whether they felt religious and faith communities strengthen Canadian values, six-in-ten agree but a considerable minority, about four-in-ten, do not believe this is the case.

The study found different levels of enthusiasm for different religious groups in Canada.

For example, nearly three-in-ten feel the presence of Catholics in Canada benefits the country as a whole, while nearly one-quarter say that Canada is worse off because of Catholicism’s influence.

Protestantism and Judaism score higher points in the public’s appreciation of their role, while Evangelical Christianity and Islam score most poorly, the study found.

The biggest group, 37 per cent, do not feel any real impact from broader society with respect to their personal beliefs.