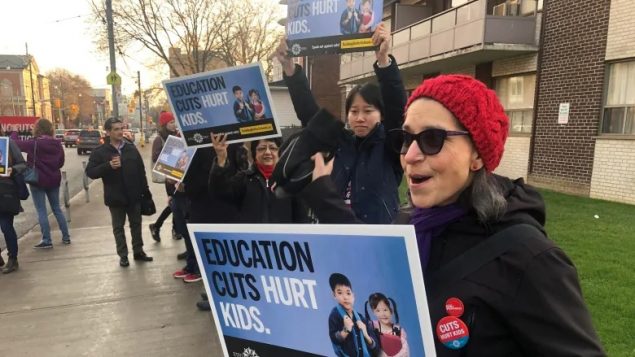 Teacher Hayley Mezei and her colleagues stood outside Queen Victoria Public School in Toronto in Novermber, on the first day of their work-to-rule job action. Some 60,000 teachers across the province are staging a one-day strike today.(Meagan Fitzpatrick/CBC)

An estimated 750,000 public school students in Ontario are not in school today after labour negotiations between the province and the Ontario Secondary School Teachers’ Federation ground to a halt at midnight.

Members of the OSSTF are staging a one-day strike that affects all public schools in Ottawa and all French schools in eastern Ontario–including elementary schools–because school boards say a lack of striking support workers makes schools unsafe.

As well, most of the province’s largest school boards, including the Toronto District School board, said previously they will be forced to close their high schools in the event of a job action .

Wages, class sizes and proposed mandatory e-learning classes are the main issues on the negotiating table. 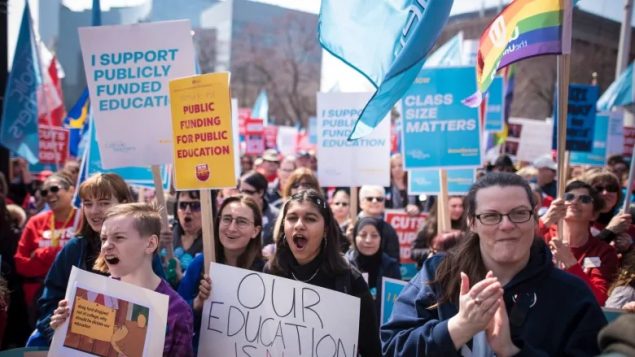 Thousands of teachers were joined by parents, students and school board trustees at a large rally on the lawn of Ontario’s provincial legislature in April. (Tijana Martin/The Canadian Press)

The government had originally wanted to increase class size from 22 to 28 but has since lowered that to 25.

The teachers, who have been without a contract since August, began a work-to-rule campaign in November.

That includes not putting comments on report cards, not participating in standardized testing and not taking part in unpaid staff meetings outside school hours.