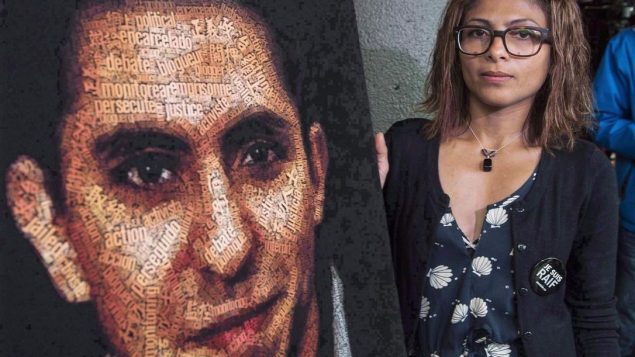 Since the arrest of her husband, Raif Badawi, Ensaf Haidar has met with leaders in Canada and around the world while campaigning for his release. (Paul Chiasson/THE CANADIAN PRESS FILE PHOTO)

Canada’s Foreign Affairs Minister Francois-Philippe Champagne says he is “very concerned” with reports that jailed Saudi blogger Raif Badawi has been transferred to solitary confinement after he declared another hunger strike to protest conditions of his detention.

Speaking to reporters on a teleconference call from a peacekeeping compound on the Sinai Peninsula in Egypt, where he was visiting Canadian troops on Thursday, Champagne said he has been following Badawi’s case very closely.

“I intend to call my Saudi Arabian counterpart before the end of the year to raise, obviously, Canada’s concern and to certainly work with our other allies and partners what we can do to express our deep concern with this recent development in his detention,” Champagne said.

Badawi and his lawyer, Waleed Abulkhair, a human rights defender who was sentenced to 15 years in jail in 2014 “for inciting public order,” have started a hunger strike to protest against their isolation and treatment at Dhahban Prison, near Jeddah in Saudi Arabia.

The information was made public by Badawi’s Canadian lawyer, Irwin Cotler, of the Raoul Wallenberg Centre for Human Rights.

In a statement released late Wednesday, Cotler said the two men are behind bars for promoting freedom of expression and human rights in Saudi Arabia.

Badawi’s wife, Ensaf Haidar, lives in Sherbrooke, Quebec, with the couple’s three children and has been waging a tireless campaign to secure her husband’s release.

Saudi Arabia expelled Canada’s ambassador in Riyadh and recalled its own ambassador in Ottawa last year amid a diplomatic showdown over Canada’s calls to release jailed Saudi women activists, including Badawi’s sister, Samar.

On Dec. 1, Saudi Arabia assumed the rotating presidency of the G20 group and will hold a leaders’ summit in Riyadh in November of 2020.

“I believe that engagement is the best way to further Canada’s foreign policy,” Champagne said in response to a question from Radio Canada International about relations between Ottawa and Riyadh.

Despite the diplomatic fallout between Ottawa and Riyadh, Saudi Arabia has remained the largest customer for Canada’s defence industry with the exception of the U.S.