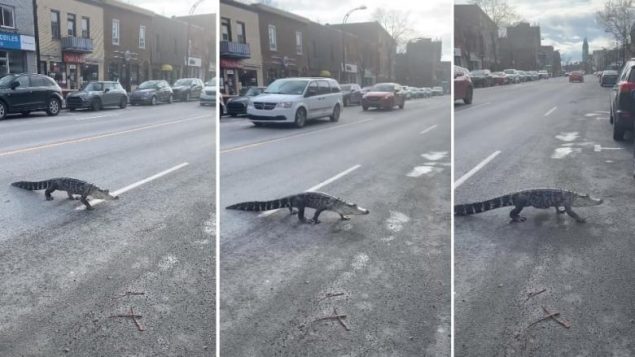 Canadian snowbirds, those who spend time in Florida during the winter, are used to seeing their share of alligators. Sunday brunchers in Montreal in December? Not so much....still.... (Mayssam Samaha/Facebook)

And now for something completely different with Sunday brunch

The good news for all concerned was the whole thing took place early on a Sunday afternoon–not late on a Saturday night.

You’re enjoying your coffee in a semi-trendy section of Montreal, you stare out into the street and….

Montreal police confirm a crocodile was spotted crossing the street in Villeray on Sunday afternoon, after it escaped from a van parked nearby. https://t.co/0hOzdkMiO4 pic.twitter.com/rSpynNbB5I

(Consider the alternative on a December day.)

Yes, indeed, that was an alligator, ladies and gents,

Now, you may be wondering why he crossed the road.

Turns out he’s the property of a company that puts on exotic animal demonstrations and decided to exit the company van as everyone was heading to lunch.

One of those at a nearby cafe watching it all unfold was Mayssam Samaha, who caught the stroll on her phone.

“It took me a few seconds to comprehend what I was seeing then we ran outside – my friend and I – to save or protect the alligator from being squished by cars,”  Samaha told CTV’s Daniel J. Rowe.

“The alligator seemed very calm,” she told Rowe. “He crossed the street and went under a car. I guess he was looking for some warmth… I wasn’t scared. I was more worried for the animal.”

Montreal Police and Mayor Valérie Plante were both notified, but the gator’s employer quickly came to retrieve him before officers got there.

“He picked him up, and brought him back into his minivan,” said Samaha.

“If you want an alligator, it should not be out on the street in this cold weather,” Samaha told The Montreal Gazette’s Marion Scott.

When the cafe’s owner first called police, officers were just a tad in disbelief.

“Apparently, it was a very funny phone call because they didn’t quite believe him,” Samaha told Scott.

“They thought he was on something.”