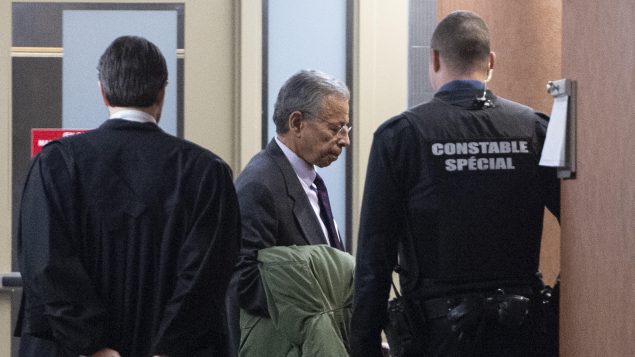 A jury convicted Sami ​​​​​​​Bebawi, 73, on all five counts he was facing, which included fraud, corruption of foreign officials and laundering proceeds of crime. (Paul Chiasson/The Canadian Press)

A former senior executive of Canadian engineering and construction giant SNC-Lavalin was found guilty Sunday of corruption and fraud charges related to the company’s dealings with the family of the late Libyan dictator Moammar Gadhafi.

After three days of deliberations, a jury in Montreal found Sami Bebawi, former head of SNC-Lavalin’s international construction division, guilty of all five charges he faced, including fraud, corruption of foreign officials and laundering of proceeds of crime.

So far, the 73-year-old former executive is the only SNC-Lavalin official to have been convicted in the case.

Sentencing hearings are scheduled to begin on Thursday.

The Montreal-based company, which found itself at the centre of a political scandal earlier this year, is facing separate charges related to the corruption scheme in Libya.

Prosecutors presented Bebawi, 73, as a key figure in an elaborate scheme to bribe Libyan officials, including one of Gadhafi’s sons, Saadi Gadhafi, in exchange for lucrative construction contracts in the oil-rich North African country.

Prosecutors alleged that SNC-Lavalin created a shell company and transferred about $113 million to its accounts.

According to the prosecution’s star witness, Riadh Ben Aissa, another former SNC-Lavalin executive and a former subordinate of Bebawi, the money was intended mainly for Saadi Gadhafi.

The company says it intends to vigorously challenge the charges.

“SNC-Lavalin is focused on its business and delivering results, and will not comment on past or pending court proceedings,” the company said Sunday in a statement.

Being found guilty could have grave consequences for SNC-Lavalin because it could find itself blacklisted and shut out of lucrative federal contracts for a period of 10 years as well as undermining its international business opportunities.

The DPA would allow the company to pay a fine rather than face a criminal trial.

The scandal also resulted in the resignation of Trudeau’s principal secretary Gerald Butts and the early retirement of Michael Wernick, the former clerk of the Privy Council.

Based on reporting by Jonathan Montpetit of CBC News