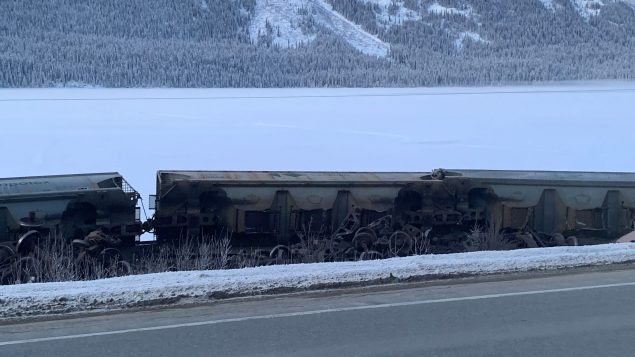 The scene of Thursday's train derailment is seen in the eastern B.C. region of Fraser-Fort George. CN says 26 cars went off the track. Investigators are trying to determine the cause of the accident and access possible environmental damage. (HO-Donal O'Beirne/Canadian Press)

Investigators seeking cause of CN derailment

Investigators are at the scene of a train derailment near the British Columbia-Alberta border where 26 railcars on a CN freight train went off the rails early Thursday morning.

They are trying to find the cause and assess any environmental damage that might have occurred.

CN says there were no injuries and no dangerous goods were on the train, which was carrying only potash, a common fertilizer

The train left the track in the Fraser-Fort George region, about 60 kilometres west of Jasper, Alberta.

British Columbia’s Ministry of the Environment says one car slid into Moose Lake and remains submerged. 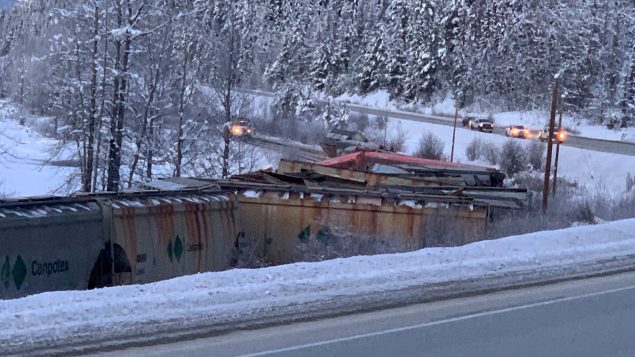 Emergency responders attend to the scene of Thursday’s derailment along a section of the Yellowhead Highway in the eastern B.C., about 60 kilometres west of Jasper, Alberta. (HO-Donal O’Beirne/Canadian Press)

Moose Lake is located along a section of the Yellowhead Highway that runs between Jasper National Park in Alberta and Mount Robson Provincial Park in B.C.

The derailment site is about 30 kilometres northeast of Valemount, B.C.

Edmonton resident Donal O’Beirne told The Canadian Press he was driving along the highway on Thursday morning when he stopped to take photos of the site.

“At least one of the cars was in Moose Lake itself and there was a lot of overturned cars that spilled potash and broken axles everywhere,” O’Beirne told CP.

O’Beirne, who described the train as “torn up,” said the site is “one of the most beautiful spots you’ll ever see on the VIA Rail route.”

The tracks have been shut down as the investigations continue.