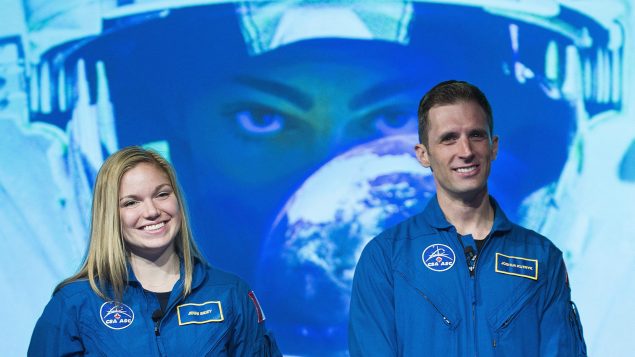 Canadian astronauts Jenni Sidey-Gibbons and Joshua Kutryk celebrated Friday the end of their basic training, along with their NASA classmates, during a graduation ceremony at the Johnson Space Center in Houston, Texas.

Sidey-Gibbons, who is from Calgary, and Kutryk, who is from Fort Saskatchewan, Alta., have spent two years in Houston with 11 NASA astronaut candidates training in NASA’s Artemis program. Their class was the first to be supervised by a Canadian astronaut, Jeremy Hansen.

The Artemis program aims to return astronauts to the moon by 2024 and to be a stepping stone for sending humans to Mars.

Last year, Canada announced its partnership in the Lunar Gateway project with NASA, which is part of the Artemis program that will see the first woman and the next man set foot on the Moon.

“Not only do they help develop new space technologies, advance scientific knowledge and promote Canada in space, they inspire all Canadians to look to the stars and dream about what is possible,” Bains said in a congratulatory statement. “Jenni and Joshua represent the best of Canada, both with our partners around the world, and our curious young people.”

Congrats to @Astro_Jenni and @Astro_Kutryk. Welcome to the family! You are an inspiration for the next generation to dare to dream. https://t.co/15HoWu91RQ

Kutryk holds the rank of lieutenant-colonel in the Royal Canadian Air Force. He has a bachelor’s degree in mechanical engineering, as well as master’s degrees in space studies, flight test engineering, and defence studies.

Prior to joining the Canadian Space Agency (CSA), Kutryk worked as an experimental test pilot and a fighter pilot in Cold Lake, Alberta, where he led the unit responsible for the operational flight-testing of fighter aircraft in Canada, according to his official biography.

From 2007 to 2011, Kutryk served as a CF-18 fighter pilot with 425 Tactical Fighter Squadron in Bagotville, Quebec. During that time he flew missions in support of Canada’s NATO, UN and NORAD commitments around the world. He has been deployed in both Libya and Afghanistan.

Sidey-Gibbons studied mechanical engineering at McGill University in Montreal and received a doctorate in engineering from the University of Cambridge. Her research focuses in combustion in space.

Our spacesuits for today’s centrifuge training!They’re not the real deal. Actually dry-suits for kayaking and a motorcycle helmet, but more cost effective and equally uncomfortable in a centrifuge at 4.5 g. I concede the win to @Astro_Jenni on who wore it better! pic.twitter.com/DPGavJ1416