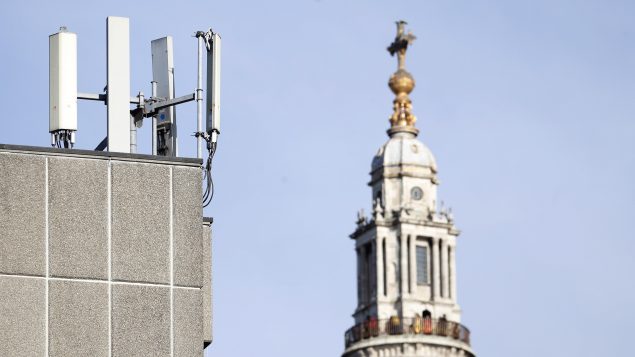 Mobile network phone masts are visible in front of St Paul's Cathedral in the City of London, Tuesday, Jan. 28, 2020. The Chinese tech firm Huawei has been designated a "high-risk vendor" but will be given the opportunity to build non-core elements of Britain's 5G network, the government has announced. The company will be banned from the "core", of the 5G network, and from operating at sensitive sites such as nuclear and military facilities, and its share of the market will be capped at 35%. (AP Photo/Alastair Grant)

“Huawei is reassured by the UK government’s confirmation that we can continue working with our customers to keep the 5G roll-out on track,” said a Huawei statement on their website. “This evidence-based decision will result in a more advanced, more secure and more cost-effective telecoms infrastructure that is fit for the future.”

Though it appears that the UK is taking some precautions.

According to a press release by the United Kingdom, “high risk vendors” are going to “excluded from sensitive ‘core’ parts of 5G and gigabit-capable networks,” and that there will be a 35 per cent cap on access to non-sensitive information.

It also states that high risk vendors would not have any access to sensitive aspects on the network, including but not limited to military fixtures.

Huawei is never specifically mentioned in the statement, but in a post talking about the future of telecommunications in the UK, UK’s National Cyber Security Centre, mentions that Huawei is a high risk vendor.

“We want world-class connectivity as soon as possible but this must not be at the expense of our national security,” said Digital Secretary, Nicky Morgan. “High risk vendors never have been and never will be in our most sensitive networks.”

This leaves Canada the only country in the Five-Eyes intelligence alliance to not have made a decision on whether or not to include Huawei in its 5G plans.

The other members of the Five Eyes alliance are New Zealand, Australia, and the United States. The United States fears that China will use Huawei to steal secrets if they’re allowed to be a part of the 5G network. Huawei denies these claims.

With files from and Reuters and CBC News