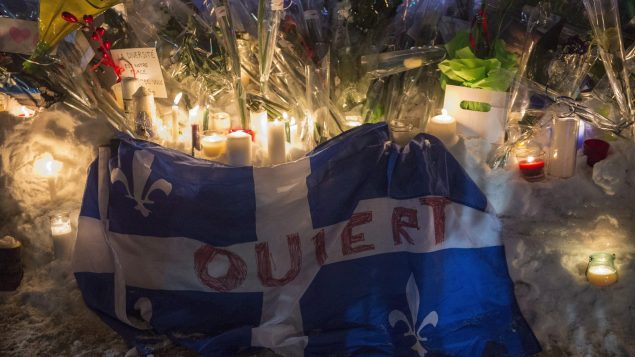 A Quebec flag with the word "Open" written on it is shown in remembrance of six victims of a shooting at mosque during a vigil in Quebec City on January 30, 2017. Events are being held Wednesday in Quebec City to mark the third anniversary of the deadly mosque shooting that claimed six lives. Organizers from the citizens group "We remember January 29" said the Quebec Islamic Cultural Centre where the killings occurred will open its doors to the community this afternoon, with a dinner and speeches later at an area church. THE CANADIAN PRESS/Paul Chiasson

Those were the names of the six men who were shot and killed three years ago today while they were worshiping at the Grande Mosquée de Quebec on January 27, 2017.

To commemorate the tragedy and honour those who were killed, Quebecers are hosting events all around the province. In the province’s capital, Quebec City, a group called the Commémoration citoyenne de l’attentat du 29 janvier 2017, are hosting a community supper at a Catholic church near the mosque.

According to CBC, the goal of the event is to build relationships between the different cultural groups in the city.

In an interview on CBC’s Daybreak, Shaheen Ashraf, a board member of the Canadian Council of Muslim Women, said that that having inter faith ceremonies, and having inter faith dialogues is important to being aware of Islamophobia.

Last year, Quebec passed the controversial Bill 21, a law that prohibits public workers, such as teachers and police officers, from wearing religious symbols while on the job.

The law was challenged by the Canadian Civil Liberties Association and the National Council of Canadian Muslims on the grounds that it will cause harm to religious minorities.

There were also demonstrations against the law.

Ashraf is also a part of a campaign called Dare to be Aware, which aims to raise awareness of hate and Islamophobia, as well as give tools to counter online hate and the racism that racialized women face.

Outside of Quebec, Canada’s Prime Minister Justin Trudeau is also remembering the tragedy.

Three years ago, 6 people were killed and 19 were wounded at the hands of Islamophobia & hate. Today, we remember the victims & stand with their families, whose lives were forever changed by the terrorist attack at the Centre culturel islamique de Québec. https://t.co/DTh86h5DbY

“Today, we mourn those who were senselessly killed, and suffered at the hands of ignorance, Islamophobia, and racism,” said Trudeau in a statement.

“We share the pain of their children, spouses, friends, and neighbours, who were robbed of their loved ones far too soon. Our thoughts are also with those injured, whose lives forever changed after this brutal and inhumane attack.”

The shooter Alexandre Bissonette was sentenced to 40 years in prison, but his legal team has recently made an appeal on the sentence, though it could be a while before any decision is made.

With files from CBC and CBC’s Daybreak