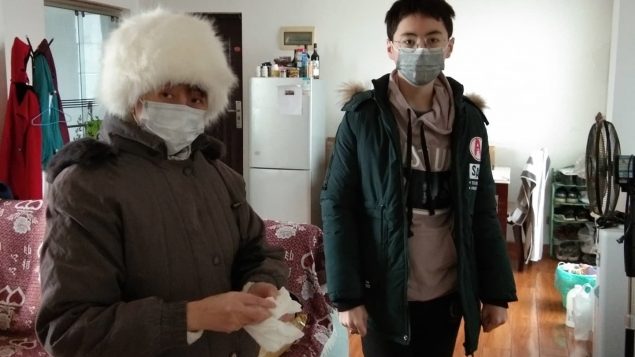 Emily Tjandra, left, and her son Wyatt Duplessis, 15, pose for a photo in their home in Wuhan, China in this handout photo. (Wayne Duplessis /THE CANADIAN PRESS/HO)

The federal government has chartered a civilian passenger plane to repatriate about 160 Canadians from the Chinese city of Wuhan, which has been at the epicentre of a novel coronavirus outbreak that has already infected nearly 6,000 people and claimed 132 lives, Foreign Affairs Minister François-Philippe Champagne said Wednesday.

Speaking to reporters in Ottawa a joint press conference in with federal Health Minister Patty Hajdu, Champagne said federal officials are now working with Chinese authorities to secure the necessary authorizations for the plane to land in Wuhan, as well as working out the logistical details of how the repatriation will proceed given the fact the city of nearly 11 million inhabitants has been under lockdown.

Champagne and Hajdu said they are also still working out the details of what would happen to those Canadians and their family members who are repatriated to Canada.

Federal officials are looking at all options, including the possibility that the repatriates could be housed at a military base for quarantine, she said.

“The first and foremost thing to remember is that we will always work to ensure the health of Canadians whether they are abroad or whether they are here,” Hajdu said. “So, yes, what we’re looking at is a scenario where we all the measures in place to protect Canadians from exposure to the virus.”

Hajdu said it’s also not clear yet whether those people who already display some symptoms of the disease would be allowed to board the plane or will have to undergo treatment in China. 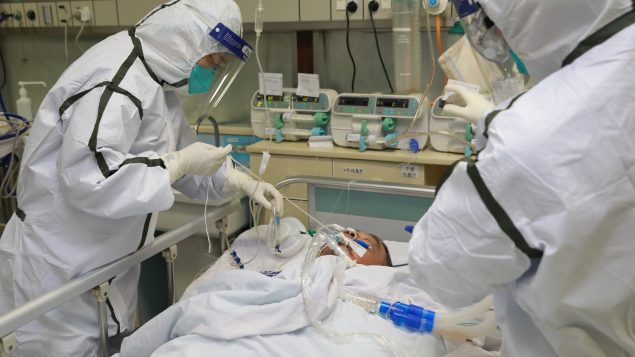 Medical staff in protective suits treat a patient with pneumonia caused by the new coronavirus at the Zhongnan Hospital of Wuhan University, in Wuhan, Hubei province, China Jan. 27, 2020. (China Daily via REUTERS)

“Part of the process now is figuring out exactly what our protocols will be when we return Canadians that wish to come home,” she said.

“We’re working very closely with our U.S. counterparts, who obviously have some experience in this and have set up some best practices, and we’ll be following their lead very closely and we’ll have more to say as those processes unfold.”

Also not all Canadians who requested assistance want to necessarily come back to Canada, she said.

“Some of the concerns is around the supplies they might be running out of, challenges of moving around the region, being separated from families that might be in another part of the region,” Hajdu said.

It could take “a number of days” before all the legal and logistical hurdles are overcome for the plane to leave for China, Champagne said.

He defended the government’s handling of the crisis and countered criticism that Canada was slow in its efforts to repatriate citizens from China.

“Canada is at the forefront of the response, we are talking with the allies,” Champagne said. “The only plane which has landed is a U.S. plane, which was scheduled to be there, the other one is Japan this morning.” 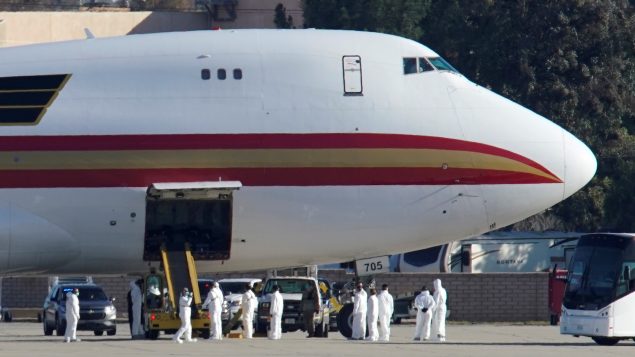 Personnel in protective clothing approach an aircraft, chartered by the U.S. State Department to evacuate government employees and other Americans from the novel coronavirus threat in the Chinese city of Wuhan, after it arrived at March Air Reserve Base in Riverside County, California, U.S., Jan. 29, 2020. (Mike Blake/REUTERS)

The European Union announced Wednesday that it is working to repatriate about 600 citizens from 14 EU countries seeking to leave China as Chinese officials said Wednesday.

A Japanese flight carrying 206 evacuees home included four people with coughs and fevers. The three men and one woman were taken to a Tokyo hospital on separate ambulances for treatment and further medical checks.

In China’s Hubei province, 17 cities including Wuhan, the epicentre of the epidemic, have been locked down, trapping more than 50 million people in the most far-reaching disease control measures ever imposed.

About 250 Canadians in Hubei have registered with Global Affairs Canada, officials said.

However, Canada has no consular presence in Hubei and Global Affairs Canada announced Wednesday that they are cutting the number of existing consular officials in China due to the outbreak.

As of January 29, 🇨🇦 diplomatic missions in 🇨🇳 are working with reduced staff due to the #coronavirus. Canadians in need of emergency consular assistance should call the Emergency Watch and Response Centre in Ottawa at +1 613 996 8885 or email sos@international.gc.ca. pic.twitter.com/RkPFbvZbNF

Wayne Tremblay, one of 168 Canadians stuck in Wuhan, told CBC New he is fine but feels abandoned by Canadian authorities.

Tremblay told CBC News that he is disappointed with the response he got from Canada’s 24-hour consular line.

Tremblay said Canadian authorities made it clear that they are not trying to get citizens out on planes. 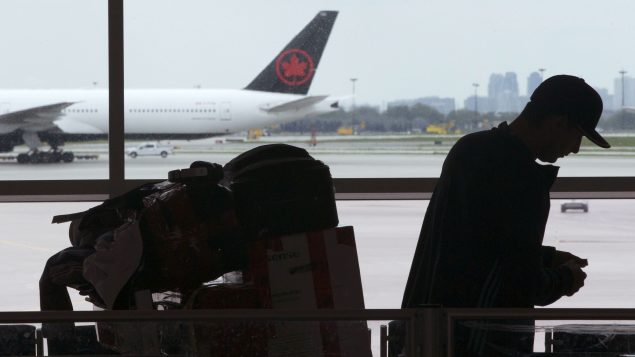 A passenger waits beside their luggage at the departure terminal at Toronto Pearson Airport, in Mississauga, Ont., Friday, May 24, 2019. Air Canada says it is cancelling select flights to China as passengers shaken by the coronavirus epidemic delay or call off travel plans. (Chris Young/THE CANADIAN PRESS)

According to the website of the Canadian embassy in Beijing, the immigration service will continue to provide services and prioritize the processing of travel documents for customers and permanent residents “who need to travel urgently to Canada for humanitarian and compassionate reasons.”

Global Affairs Canada’s emergency response centre can be reached by phone at 613-996-8885 or by email sos@international.gc.ca.

The government has launched a website dedicated to the coronavirus and set up an information hotline.

Champagne said Global Affairs also has issued a new travel advisory telling people to avoid all non-essential travel to China. Earlier this week, the department warned against all travel to Hubei province, the centre of the coronavirus outbreak.