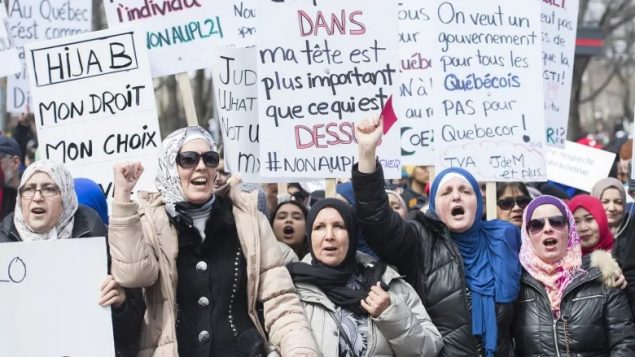 An estimated several hundred people turned out Sunday in Montreal for an anti-racism rally aimed at a pair of laws enacted earlier this year by Quebec’s provincial government that protesters say fuel discrimination.

Bill 21 bars some public sector workers, including teachers and police officers, from wearing religious symbols on the job.

The bills have stirred up a lot of hard feelings–both for and against–and court cases are proceeding while the Quebec government has invoked the notwithstanding clause in the Constitution to avoid having the law struck down as a violation of the Charter of Rights and Freedoms.

A box of buttons that oppose Quebec’s Bill 21 are seen here during a demonstration in Montreal earlier this month.The law bans public sector workers from wearing religious symbols on the job. (Graham Hughes/Canadian Press)

Opponents’ hopes that the bills would play a big role in the lead-up to last week’s federal election.

Those hopes were mostly dashed as federal leaders skirted the issue in search of Quebec votes as polls showed 65 to 70 per cent of Quebec residents supporting the legislation.

Liberal leader and Prime Minister Justin Trudeau went further though he remained circumspect about what the government might do, noting that people in Quebec have already gone to court.

“Yes, it’s awkward politically,” Trudeau said at a leadership debate earlier this month, “but I am the only one on this stage who has said, yes, a federal government might have to intervene on this.”

Protesters at Sunday’s rally vowed that they would not give up their fight to overturn Bill 21.

“With this law, the government opened a Pandora’s Box and gave Islamophobes the liberty to spit on an entire religious community,” Ichrak Nourel Hak, a teaching student who wears a hijab, told Canadian Press.