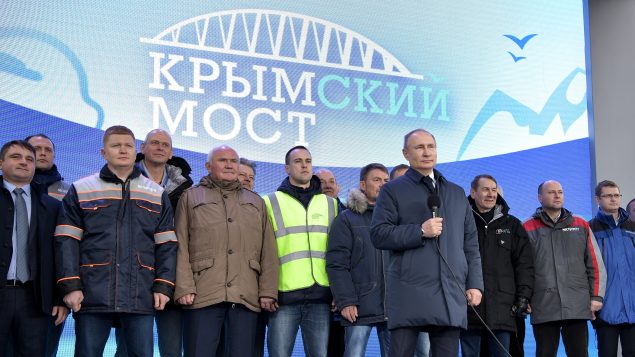 Russian President Vladimir Putin takes part in a ceremony opening the railway part of a bridge, which was constructed to connect the Russian mainland with the Crimean Peninsula across the Kerch Strait, in Taman, Russia Dec. 23, 2019. (Aleksey Nikolskyi/Sputnik/Kremlin via REUTERS)

Russia fires back at ‘illegal’ and ‘futile’ Canadian sanctions

Russia’s embassy in Canada lashed out Wednesday at new Canadian sanctions against six Russian officials in Crimea over their involvement in the September 2019 local elections in the Russian-controlled Black Sea peninsula that was part of Ukraine before Moscow annexed it in 2014.

The Canadian sanctions, which were imposed under the Special Economic Measures Act, target the Kremlin appointed interim governor of Crimea, as well as local politicians in the strategic city of Sevastopol, home to Russia’s Black Sea Fleet. 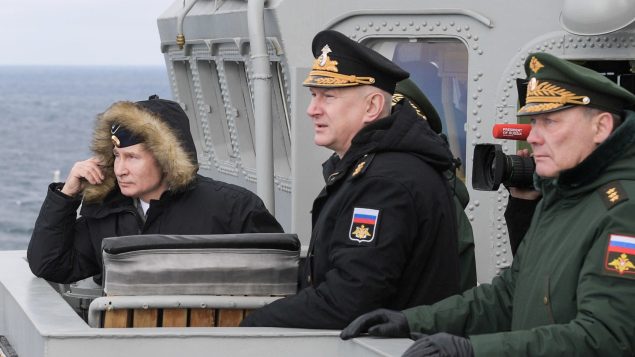 “[The] new round of Canadian illegal anti-Russian sanctions is a futile attempt to deny the obvious reality that Crimea is Russia, once and forever, in accordance with the overwhelming will of its people expressed at the referendum and the right for self-determination enshrined in the UN Charter,” the Russian embassy said in a statement released Wednesday evening.

Read the statement of the Russian Embassy in Canada on the new round of illegal Canadian #sanctions against 🇷🇺#CrimeaIsRussia, once and forever. pic.twitter.com/XF3M9fmamx

The Russian side will respond with countersanctions, including a reciprocal expansion of a travel ban that targets more than a dozen Canadian officials, including Deputy Prime Minister Chrystia Freeland, the embassy said.

“It is a deplorable development for which Ottawa bears full responsibility,” the statement said. “Canada’s action perpetuate [sic] the short-sighted pattern of self-isolation from Russia, bringing bilateral relations to a new low contrary to common sense and this country’s national interests.”

Since Russia’s illegal annexation of Crimea in 2014, Canada has sanctioned more than 430 individuals and entities, many in coordination with its allies, Champagne said. 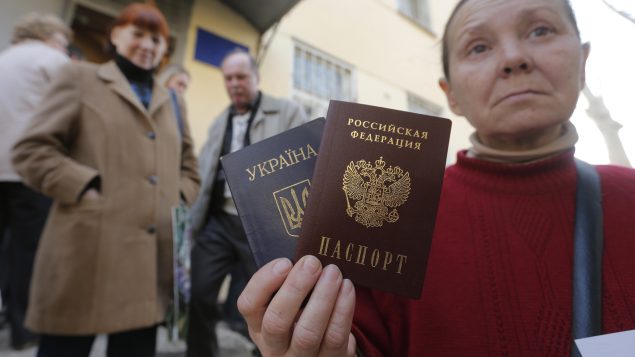 Canada and most of the world do not recognize the legitimacy of the March 16, 2014 referendum where over 97 per cent of voters cast their ballots in favour of leaving Ukraine and joining Russia.

Critics of the controversial vote argue that the Kremlin organized a sham referendum after its special forces occupied Crimea and expelled the Ukrainian military and security forces. They say the vote contravened Ukraine’s constitution and international law, and was conducted in an atmosphere of intimidation and political repression, especially against the Crimean Muslim Tatar minority.

Russia argues that the Ukrainian constitution was already breached by the Western-backed ouster of the democratically elected but pro-Russian President Viktor Yanoukovich following massive protests in February of 2014.

Russian officials say their actions were no different from what NATO did in Kosovo in 1999, when it expelled the Serbian military and organized a referendum where the Albanian majority of voted for independence from Serbia.

Western experts say comparisons with Kosovo are misleading because NATO was forced to respond to Belgrade’s brutal campaign of ethnic cleansing against the Kosovo Albanians. No such threat existed in Crimea to justify a Russian intervention, they argue.

Russia also intervened in the Russian-speaking Donbas region of eastern Ukraine where it backed pro-Russian rebels.

Since April of 2014, the fighting between the pro-Russian rebels, backed in many cases by regular Russian troops, and the Ukrainian military and paramilitary forces has killed over 10,000 people.