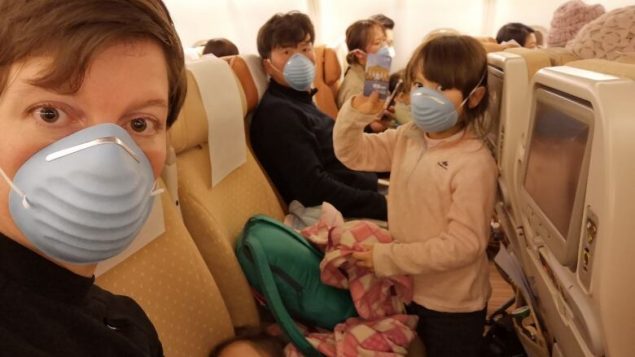 Megan Millward, her husband Lie Zhang and their two children on board an evacuation flight from Wuhan, China.

A chartered plane with 194 Canadians on board has left the Chinese city of Wuhan and is expected to arrive at the Canadian Forces Base Trenton near Toronto Friday morning. after a short refuelling stop in Vancouver, officials announced Thursday.

Update on Canadian flight from #Wuhan:

The plane is wheels up. More information to follow. pic.twitter.com/rbQLz6uFph

Another 50 or so Canadians are expected to hitch a ride on a U.S. plane, which will depart Wuhan a few hours later and will land in Vancouver for refuelling, giving the Canadian passengers the opportunity to disembark, Champagne said earlier, speaking to reporters at a press conference in Ottawa.

Those passengers will also be taken to Trenton for a two-week quarantine at the military base, Health Minister Patty Hajdu said.

And the federal government is sending a second plane to Wuhan, the epicentre of the coronavirus outbreak, to bring back the remaining Canadians.

“With the second flight, we’ll be able to bring every Canadian home,” Champagne said.

Of 211 people who were on the list of Canadians set to leave Wuhan on Feb. 6, only 194 were able to make it to the airport.

Champagne said the second chartered flight on Feb. 10 will give people stranded under a strict lockdown in Wuhan and neighbouring cities “ample time” to get to the airport.

He also once again reiterated his call to Canadians whose presence in China is not essential to leave the country via commercial flights while they are available.

Hajdu said all Canadians on board the departing flight were screened by Chinese authorities and Canadian Forces medics accompanying the flight. No person with symptoms of the flu-like virus was allowed on the flight, she said. The military medics will observe the passengers throughout the flight and those who will begin displaying symptoms will be isolated, Hajdu said.

Upon arrival at the Yukon lodge in Trenton, the passengers will be screened again and placed under a 14-day quarantine, she said.

Each family will be provided a separate room and meals will be delivered to rooms, Hajdu said.

Medical and mental health staff will regularly monitor the evacuees and offer psychological support to them, she said.

“I think it’s important to remember that these people have been through a stressful time under quarantine,” Hajdu said. “This is a scary time for them not knowing whether or not they’re going to come back to Canada and their families.”