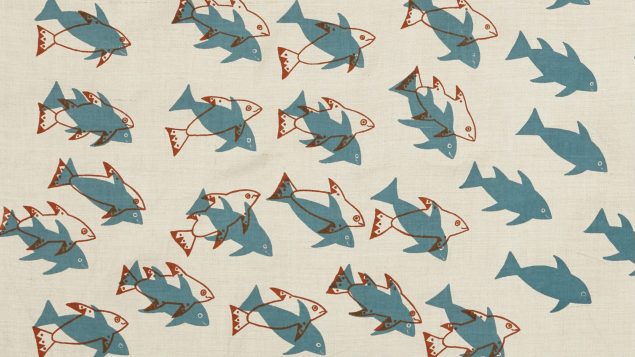 An exhibition currently underway at the Textile Museum of Canada  explores the little-known story of the graphic texitle program in the Inuit community of Cape Dorset which ignited the public’s imagination in the 1960s before winding down in the late 60s.

“There was a lot to learn because there is very little awareness of this enterprise and very little written about it,” Roxane Shaughnessy, curator of Printed Textiles from Kinngait Studios, said in a phone interview.

“These textiles are very bold graphic design, really interesting patterns, really engaging, really captivating textiles. It’s an opportunity to enjoy and learn about the artists whose designs are represented, connecting the art, the prints and the sculpture that come out of the North. And to see another aspect of that creativity and resourcefulness of the artists.”

Many of the artists and printmakers involved in the textile program include big names that went on to become internationally famous through the annual Cape Dorset print collection, including Kenojuak Ashevak (1927-2013), Pitseolak Ashoona (1904–1983), Parr (1893–1969), and Pudlo Pudlat (1916–1992). 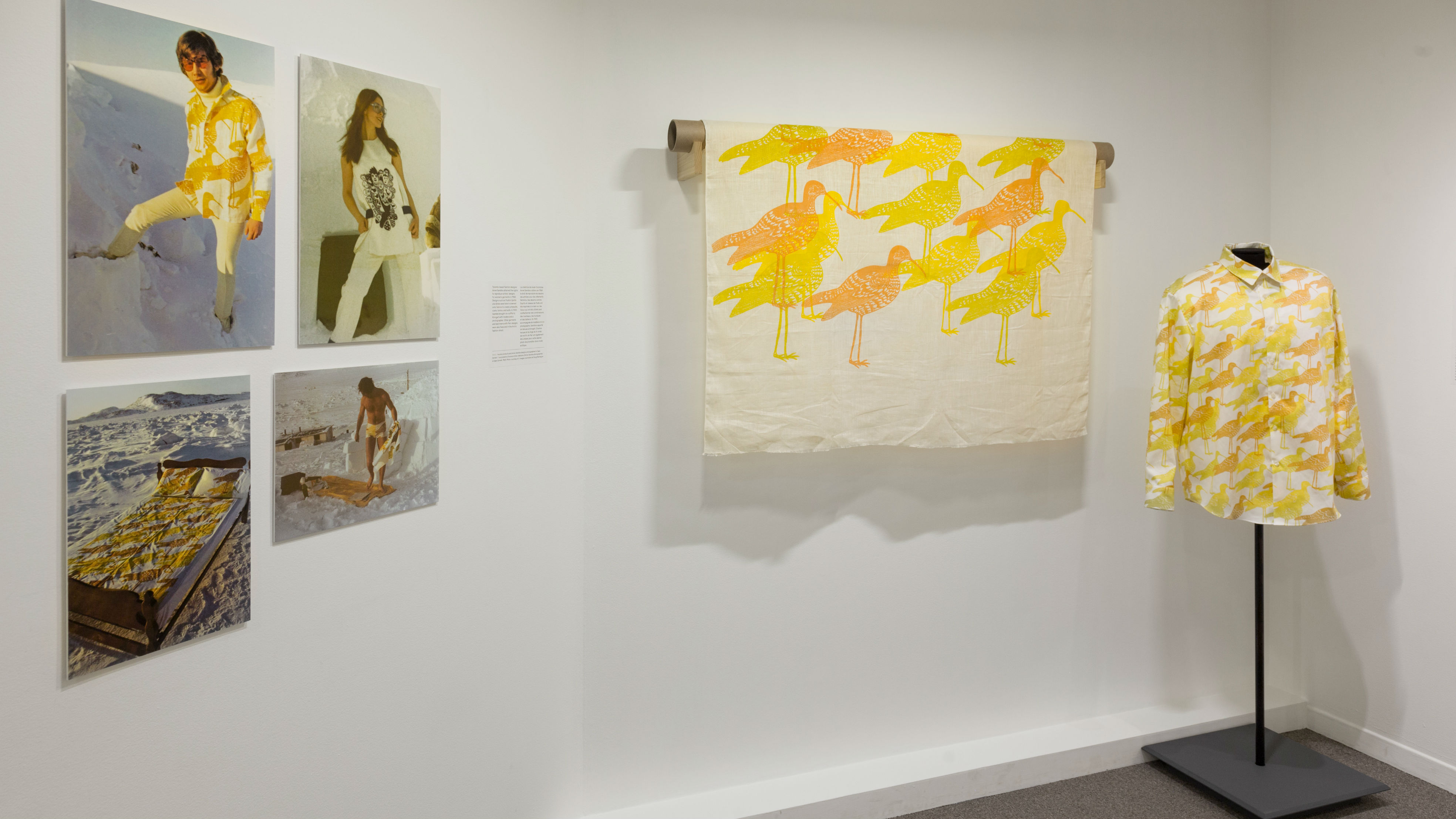 An installation view of the Printed Textiles from Kinngait Studios exhibition. (Courtesy Textile Museum of Canada)

“There is this new wave of bringing it back, and bringing it back with such attitude, often times almost aggressively, because it was almost taken away from us. So, we’re super proud to show it off, that it’s still here. It’s such a powerful thing.”

Shaughnessy said the works are a powerful window, not only into the textile program, but also the art process itself.

“In the examples that we have, we can actually see the process of experimentation,” she said.

“They were trying out different things. For example, there were attempts at what looks like, what I think is stencilling with brushes, and you can see where some of it just didn’t work out well where the print was a little off or some of the colouring was smudged. It really speaks to the effort that was put into this. You see the trial and error and perseverance through these different stages of experimentation to come up with a marketable product, something that could sell and that would be successful. So we get the whole trajectory  through just looking at the objects and analyzing the fabrics, which is really fascinating.”

The Cape Dorset prints of Arctic nature and traditional Inuit life became a hit in the art world and continue to this day through the community’s Kinngait Studios. But somehow, the short-lived textile program got little public, academic or curatorial attention after it was shut down.

In 2016, the West Baffin Eskimo Cooperative invited Roxane Shaughnessy to come look at some textiles in their archives. Shaughnessy said as soon as she saw them she knew there needed to be an exhibition. She said piecing together the history of the program through visits to Cape Dorset to speak with community members was key to the development of the show.

“Working with and involving the community was essential in the whole project and the development of the exhibition, and we’ve really relied on on them for insights and helping with provenance and also to understand the context of this making,” she said. 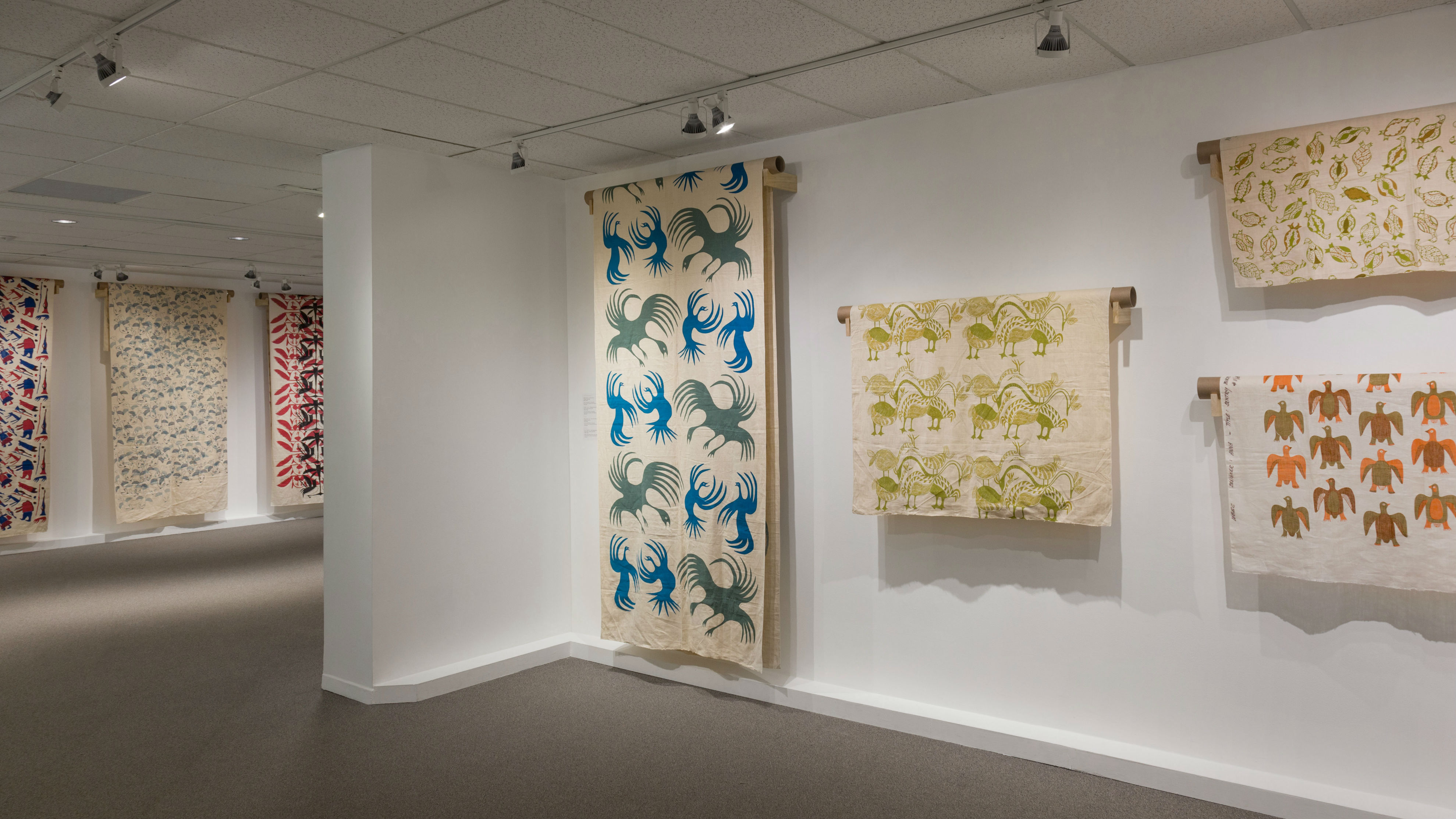 An installation view of the exhibition Printed Textiles from Kinngait Studios. (Darren Rigo/Textile Museum of Canada)

Examining what little archival information existed was also important in further excavating the story behind the program.

“(When the textiles were initially released) they were promoted across Canada and were very well received,” Shaughnessy said. “There was a great response, very enthusiastic. They were entered into the design 67 competition just prior to Expo 67 (in Montreal). They won awards. They were shown at Expo and also in the Canadian pavilion. But unfortunately they didn’t sell well, and there were also the complications of bringing materials and so on up to the North. These factors combined to end the textile printing program by the late 60s.

“We don’t have the full story of why the sales weren’t successful so there is a lot more research that can be done on that. We’re hoping that there will be other lines of inquiry that will come out of this (exhibition) that will deepen our knowledge about the initiative, and also the artists and print makers who were involved.”

The exhibition, which opened in December, will run until August.

Canada: Inuit artists in the their own words, Eye on the Arctic