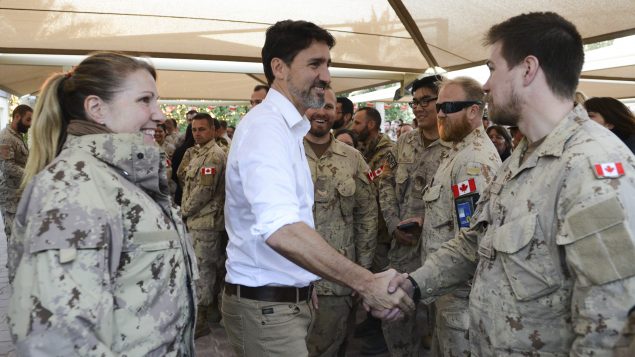 Prime Minister Justin Trudeau arrived in Kuwait on Monday to visit Canadian troops and meetings with the country’s leadership as the region remains on edge amid high tensions between the U.S. and Iran, as well as political instability in neighbouring Iraq.

A contingent of several hundred Canadian troops is based in Kuwait to support two separate Canadian operations in Iraq: a NATO training mission in and around the capital Baghdad, with about 250 soldiers, and about 250 Canadian Special Forces soldiers in northern Iraq, as part of Canada’s contribution to the U.S.-led coalition to fight the remnants of the so-called Islamic State.

Several of these Canadians in Iraq were temporarily relocated to the Canadian base in Kuwait after Canada suspended both operations on Jan. 7, days after top Iranian general Qasem Soleimani was killed in a targeted drone strike by the United States.

Iran retaliated by firing several ballistic missiles at Iraqi bases housing U.S. and allied troops, including Canadians, none of whom were hurt.

Trudeau met with Canadian troops at Camp Canada, located at the Ali Al Salem Air Base, about 60 kilometres west of Kuwait City.

Trudeau also plans to meet with Prime Minister Sabah Al-Khalid Al-Sabah during his time in Kuwait.

The trip to Kuwait was planned as part of Trudeau’s week-long visit to Africa and Germany but was not made public until now because of security concerns.

Trudeau is scheduled to travel to Senegal and Munich following today’s stop in Kuwait.

Earlier in the day, Trudeau met with President of Burkina Faso Roch Marc Christian Kaboré on the margins of the 33rd African Union Summit in Addis Ababa, Ethiopia, to discuss the deteriorating security situation in the West African country that has seen a worrying increase of jihadist attacks, including against Canadians.

“Prime Minister Trudeau conveyed Canada’s solidarity with the Burkinabe people as they confront important security and humanitarian challenges brought about by the crisis in the Sahel,” said a readout of the meeting released by the Prime Minister’s Office. “The two leaders agreed on the need for continued collaboration with partners in the region to prevent conflict and combat terrorism.”