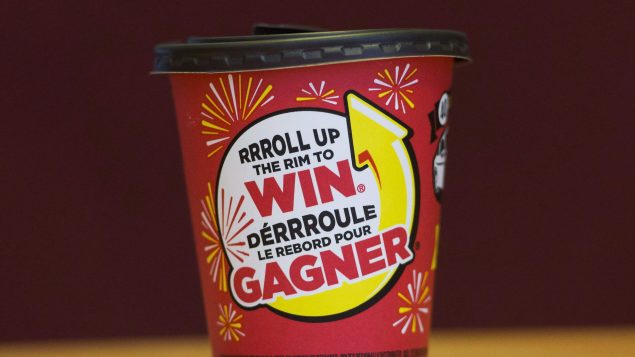 The coffee chain, Tim Hortons will not be offering paper Roll Up the Rim cups for its iconic contest due to the ''current public health environment.'' (The Canadian Press/Nathan Denette)

The coffee chain, Tim Hortons, is making changes to its famous Roll Up the Rim contest, to allow for paper, digital and sustainable play according to a press release sent out by the company.

This year the contest, which lasts for four weeks starting on March 7, to April 11, will have customers digitally roll up the rim to earn prizes through the Tim Hortons app, or a website.

“We listened to the feedback from our guests, who wanted us to modernize the program. We’re excited to share the news that we are updating Roll Up the Rim To Win in 2020 to reflect the future of the Tim Hortons brand, while still embracing the best of our heritage,” said Hope Bagozzi, the chief marketing officer of Tim Hortons.

To play digitally, customers will have to give an email address and register for Tim Hortons reward account.

Customers who still want to manually roll up the rim will still be able to purchase physical cups, however it will only be for the first two weeks of the conest.

Tim Hortons also said that they will be giving away 1.8 million reusable cups just after the start of the contest on March 10, as part of their 10 year plan to change perceptions and habits in regards to reusable cups.

“We are pleased to see that Tim Hortons is committing to go beyond the disposable cup by incentivizing its customers to use reusables during its Roll Up the Rim contest,” Sarah King, Greenpeace Canada’s head of oceans and plastics campaign said in an emailed statement.

“We need a mass culture shift away from single-useness, and we need major companies to drive it.”

According to Greenpeace Canda, Tim Hortons’ produced 260 million single use coffee cups for the Roll Up the Rim contest last year. They added that in a country wide review of 20 major cities, 15 of them did not collect the cups and lids for recycling or composting.

“We encourage Tim Hortons to act swiftly to take this positive step to the next level and commit to reduce its plastic footprint once and for all to address its role in the growing waste and pollution crisis,” King added.

With files from CBC News and Emily Chung