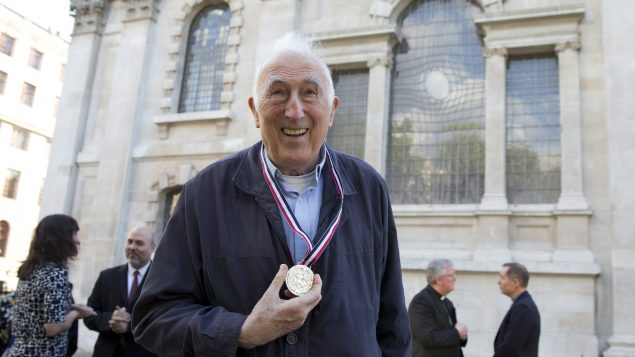 In this May 18, 2015 file photo, Jean Vanier founder of L'Arche communities, is seen at St Martins-in-the-Fields church in London. A new report that found Vanier to have committed sexual abuse is sending shockwaves across Canada. (Alastair Grant/AP Photo/File)

A report about a prominent Canadian religious icon who founded an organization that helped improve living conditions for people with developmental disabilities around the world is sending shock waves through the country’s Roman Catholic community.

The report followed an inquiry commissioned last year by L’Arche and carried out by the independent U.K.-based GCPS Consulting group.

It found that Vanier, who died last year at the age of 90, engaged in “manipulative sexual relationships” from 1970 to 2005.

AP says the report did not rule out potential other victims.

There are 154 L’Arche residential communities in 38 countries on five continents.

Numerous schools in Canada are named after Vanier and at least two Catholic schools in the Greater Toronto say they are “deeply distressed” by the report. 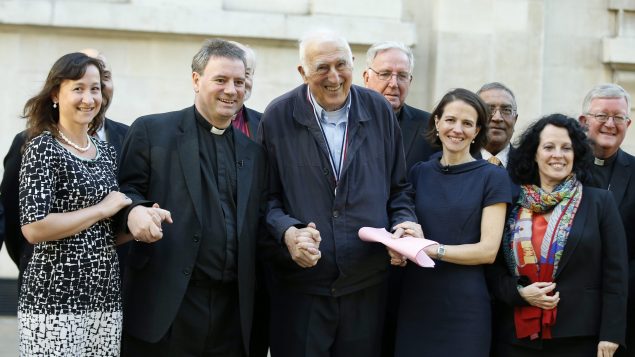 Vanier, founder of L’Arche communities, poses for a photograph with Jennifer Templeton Simpson, left, Helen Templeton, second right and the French Ambassador to Britain, Sylvie Bermann, right after he received the Templeton Prize at St Martins-in-the-Fields church in London in May 2015. (Alastair Grant/AP Photo/File)

The Toronto Catholic District School Board made social workers available at Jean Vanier Catholic Secondary School in Scarborough to provide support to staff and students.

The Halton Catholic District School Board’s education director, Pat Daly, said the board is considering whether or not to change the name of one of its schools.

King’s University College, which has a research centre named after Vanier, says it plans to hold meetings to see how the report impacts their community.

Vanier published numerous books and spent much of his time travelling the world to encourage dialogue across religions.

In 2015 he was awarded the Templeton Prize for spiritual work

He was named a Companion of the Order of Canada in 1986 and Grand Officer, National Order of Quebec in 1992.

Vanier was the son of Georges Vanier, who served as Canada’s governor general from 1959 to 1967.

With files from CBC, AP, CP,