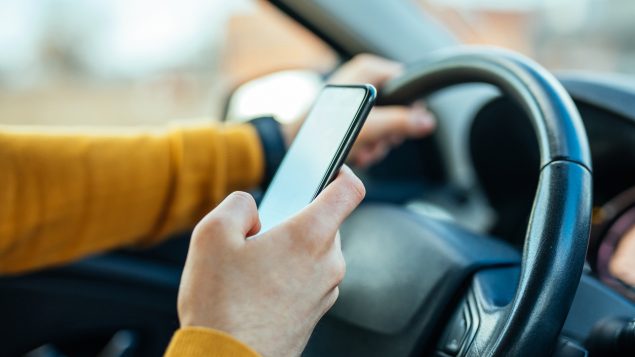 Shot of a male using mobile phone while driving the car. (iStock/bernardbodo)

According to survey results released from Rates.ca, 40 per cent of Canadians believe that distracted driving is the number one cause of vehicular deaths, passing impaired driving.

Rates.ca surveyed 1173 Canadians and asked them about their experiences and concerns with distracted driving. Rates.ca is a website that publishes insurance rates from insurance providers.

According to the survey, 58 per cent of Canadians said that the likeliest contributor to a collision from distracted driving was texting, followed by making a hands free phone call at 19 per cent.

“We see signs in this survey that people are getting concerned about distracted driving and we would love to see […] over the next few years that distracted driving, certainly texting while you drive is simply unacceptable,” said Paul Kovacs, Road Safety Ambassador at Rates.ca.

“Not only are many Canadians expressing their concern about the risk of fatalities from distracted driving but they’re taking action, they’re speaking up and talk to the driver saying please focus on your driving,” Kovacs said.

He added that Canadians should put their phone on airplane mode and set it aside when driving to reduce distractions.

Sixty-seven per cent of Canadians also said that there should be stiffer penalties for younger drivers on their first and second offences.

“Distracted driving has emerged as a really serious road safety issue in Canada and elsewhere around the world. This is something that’s entirely preventable,” Kovacs said.

Kovacs added that it’s important to set aside all distractions while driving and to speak up when you see someone not focused on driving to bring greater safety on the roads.