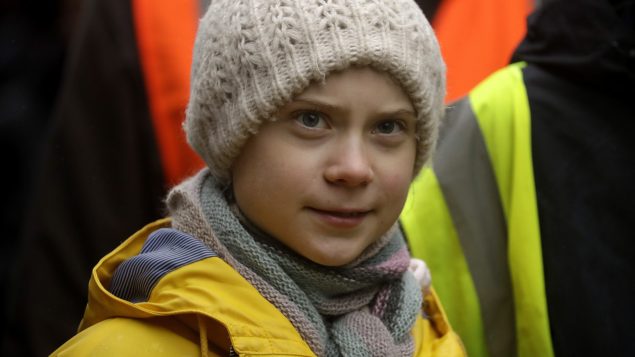 Climate activist Greta Thunberg, from Sweden marches with other demonstrators as she participates in a school strike climate protest in Bristol, south west England, Friday, Feb. 28, 2020. Thunberg says a decal bearing an energy services company's logo below a cartoon depicting what appears to be a sexual assault shows desperation. (The Canadian Press/AP/Matt Dunham)

The Alberta based energy company X-Site Energy Services said that they deeply regret that pain that was caused by a sexually suggestive cartoon that seemed to depict the 17 year old climate activist Greta Thunberg, according to a statement on the company released on their website today.

The cartoon had appeared on a decal that had the company’s name on it.

“We recognize that it is not enough to apologize for the image associated with our company logo on the decals that circulated last week,” said a statement on the company’s website. “We are taking action to condemn this image and its publication and are committed to recovering and destroying the decals we distributed.”

X-Site Energy said that they are taking full responsibility and made organizational changes to reflect that.

The company added that they are discussing their code of conduct with their employees and intend to introduce policies that support a respectful workplace culture.

The image, which was published last Wednesday, depicted an apparently naked female figure, viewed from behind with long braided hair being pulled on by a pair of hands with the name Greta written across the back in an apparent reference to Thunberg.

It was denounced on social media.

The graphic in this article is completely deplorable, unacceptable and degrading. This is not what our province stands for. Whoever is responsible should be ashamed and apologize immediately. I stand with Albertans against this horrendous image. #ableg https://t.co/JisKaWI6lN

“They are starting to get more and more desperate,” Thunberg said in a tweet. “This shows that we’re winning.”

Last week, X-Site Energy General Manager Doug Sparrow denied an interview with CBC News but told the Calgary Radio Station CFFR that the decal was not from an X-Site or any employee.

CBC News tried to reach Sparrow, but their call went straight to voicemail, and Sparrow did not respond to a message from CBC News.

CBC: ‘This shows we are winning’: Greta Thunberg responds after sexually graphic illustration surfaces on Facebook