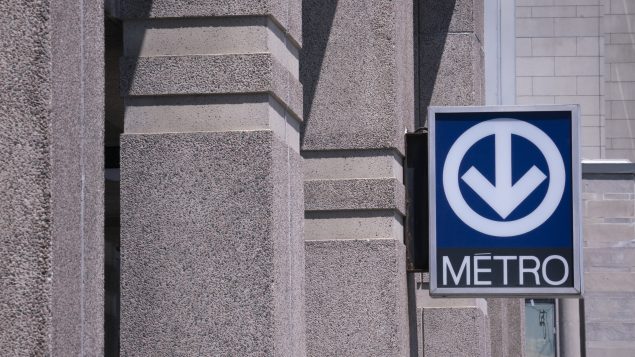 A direction sign to the subway, locally called the "metro", is seen in Montreal on June 18, 2019. (The Canadian Press/Paul Chiasson)

The Société de Transport de Montréal said in a statement that they will increase cleaning frequency to more than once a week on buses, paratransit minibuses, trains and stations, as a precautionary measure.

“The STM is in close contact with public health authorities, who are keeping us informed of the situation as well as any cases that might concern us and the measures that need to be taken,” the STM said in a statement to CBC News yesterday afternoon.

They also said they have prepared the distribution of disinfectant wipes for all STM agents, train operators and drivers, on both regular and paratransit networks.

The STM said that despite the fact that experts say that the risk of transmission remains low on public transit and the virus does not survive on a dry surface for more than three hours, they are still taking protective measures.

Last week, the STM said that it washes car floors every few days, but that they would introduce a cleaning program to make sure everything in metro cars, including the hand rails were cleaned within seven days.

The STM also said that they would clean and disinfect all visible surfaces at least once a week.

Earlier this week, Quebec public health officials said that a person who tested positive for COVID-19, commonly known as coronavirus had taken a bus on the South Shore of Montreal, and taken two metro lines over a two week period.

As of late Wednesday there are 118 confirmed and presumptive cases of coronavirus in Canada. Quebec has 13 confirmed cases, and 136 cases are under investigation.

With files from CBC News, and Isaac Olson