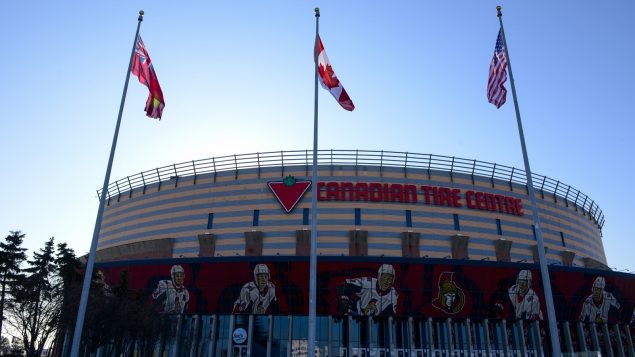 Home rink of the Ottawa Senators the "Canadian Tire Centre" is pictured in Ottawa on Thursday, March 12, 2020. The National Hockey League has suspended the season due to concerns about the coronavirus. THE CANADIAN PRESS/Sean Kilpatrick

The first National Hockey League player tested positive for COVID-19 last night, according to a press release from Ottawa Senators.

The team did not identify which player had tested positive but said that they have mild symptoms and are in isolation.

“The Ottawa Senators are in the process of notifying anyone who has had known close contact with the athlete and are working with our team doctors and public health officials,” the Ottawa Senators said in a statement.

An Ottawa Senators player has tested positive for the COVID-19 virus. The player has had mild symptoms and is in isolation.

They added that as a result of the positive case, all members of the Senators are requested to remain isolated and to monitor their health.

The NHL put their season on pause last Thursday soon after the NBA suspended their season because a player from the Utah Jazz, Rudy Gobert, tested positive for COVID-19. Due to the fact that many NHL and NBA teams share locker rooms, NHL commissioner, Gary Bettman, said that it was likely that an NHL player would test positive at some point.

It is currently unclear when or if the NHL season, and playoffs will resume, but Bettman said that the league is looking at every possible option.

“Our goal is to resume play as soon as it is appropriate and prudent, so that we will be able to complete the season and award that Stanley Cup,” Bettman said in a statement last Thursday, when the NHL paused the season.

As of Wednesday morning, Canada has 598 confirmed and presumptive cases, and eight people have died due to the COVID-19 outbreak.