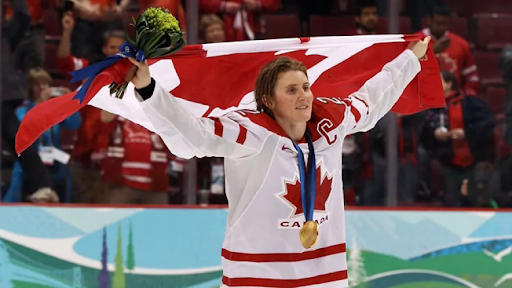 2010 gold medal hockey star, 2014 Sochi flag bearer, and now member of the OIC, Hayley Wickenheiser has called the decision to proceed with the Tokyo games as “ irresponsible”.(Bruce Bennett/Getty Images via CBC)

Japan says Olympics will happen, but doubt increases daily due to COVID-19

As of Tuesday the International Olympic Committee said there were no plans to cancel or postpone the summer event in Tokyo scheduled to take place between July 24 and August 8.

This comes even as the Vice-President of Japan’s Olympic Committee, Kozo Tashima, has tested positive for the coronavirus.

Australian John Coates who is IOC Vice-President and Chair of the Coordination Committee for Tokyo recently said there was no deadline for a decision on whether to proceed or postpone.

He told Australian newspapers that a May deadline mentioned by the former head of WADA, Canadian Dick Pound, was not true.

While top officials insist the games are still months away and will go ahead, many athletes have found that their qualifying events around the world have been cancelled, throwing confusion into who could even go if the Olympics were to go ahead. Many said training for their event was now difficult to impossible with facilities, locations, and travel all being shut down.

Several top athletes are now pointing out the extreme contradiction of governments around the world cancelling any large public gathering or event, and that of the Tokyo games in which many thousands of athletes, many more thousands of family members, coaches and officials, and many more tens of thousands of fans all from countries around the globe, will be flying in the crowded games and city, and then flying out again to places all over the world.

British four-time rowing gold medalist Matthew Pinsent tweeted that it was not safe to hold the Olympics and they should be called off. Greek Olympic pole vault champion, Katerina Stefanidi is reported to have said holding the Olympics is “risking our health”.

Canadian middle-distance runner Charles Philibert-Thiboutot, commenting to the Canadian Press noted that many small businesses and workers were suffering, and insisting that the games go ahead was “insensitive”.

Canadian triple-jumper Caroline Ehrhardt said she would like to see the games proceed but noted that with so many qualifying events cancelled, along with all the difficulties to train in the weeks leading up to the event indicated a postponement wouldn’t be a bad thing.

Canadian women’s hockey star, who is a member of the OIC said the decision to proceed with such conviction is “insensitive and irresponsible” in light of the world situation.