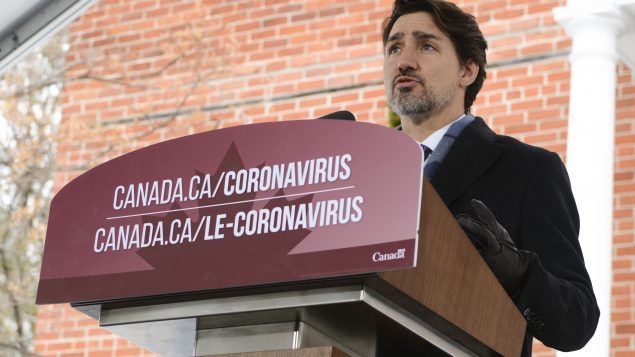 Prime Minister Justin Trudeau is calling on a special session of the House of Commons convening Tuesday to quickly pass direct financial aid measures for Canadians and businesses proposed by the Liberal government.

“When you’re trying to help get money out to people, speed is of the essence, especially in an unprecedented situation like this one,” said Trudeau speaking from the porch of his house in Ottawa ahead of a historic emergency recall of the House of Commons.

But shortly after the House of Commons proceedings got underway, the chamber suspended itself to give the minority Liberal government and opposition parties a chance to hash out a deal.

The pause in proceedings came after the opposition Conservatives expressed concerns about the emergency taxation powers the government granted itself in the proposed legislation. 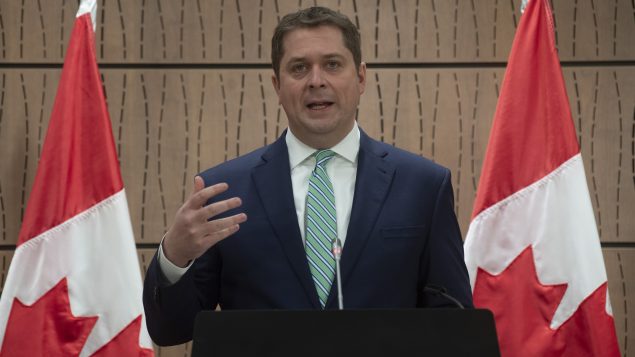 Leader of the Opposition Andrew Scheer speaks during a news conference on the COVID-19 virus in Ottawa, Tuesday March 24, 2020. (Adrian Wyld/THE CANADIAN PRESS)

The Conservatives said they cannot vote for the bill in its current form over concerns about provisions in the legislation that grant unprecedented spending authority to Finance Minister Bill Morneau during this crisis, with an ill-defined role for Parliament.

Conservative Leader Andrew Scheer told reporters Tuesday his party plans to support the $82-billion aid package proposed by the Trudeau government to deal with the pandemic and the ensuing economic damage.

“All parties recognize that these are unprecedented times and that urgent action is needed to support Canadians who are struggling,” Scheer said.

“Today, we are focused on getting that support out the door and into the hands of Canadians so that no one has to worry about putting food on their table or paying their rent. Any conversation about new government powers should not get in the way of passing this much-needed assistance.”

Once the emergency aid legislation passes in the House, it will move on to the Senate for more debate, which is expected tomorrow. 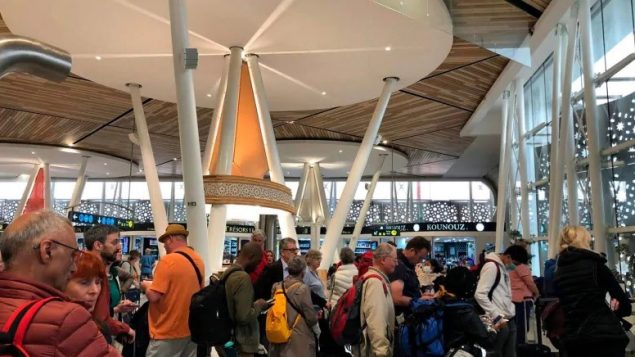 Passengers lined up to board one of the few flights out of Morocco in Marrakech last Thursday. (Jessica Blough/The Associated Press)

During his daily update, Trudeau, who’s been working from home since his wife tested positive to COVID-19, also spoke about the government’s efforts to bring more stranded Canadians home.

Nearly one million Canadians have returned home over the past week, Trudeau said.

The government is also working on getting home thousands of Canadians who have been stuck in Morocco, Panama, Tunisia, Ukraine, Ecuador, El Salvador, Guatemala, Honduras, and Spain, he said.

‘All options are on the table’

Trudeau once again urged Canadians to do their part in helping the government contain the spread of the potentially deadly virus that has already infected more than 407,000 people worldwide and killed at least 18,000 people.

Canada has more than 2,500 confirmed and presumptive cases of COVID-19 and 26 deaths related to the virus.

“Every day, someone asks me how long these restrictions will be in place, and the truth is we don’t know yet,” Trudeau said. “But here’s what we do know: The duration of this crisis will be determined by the choices we make right now, by decisions we take every single day. So if you want things to get back to normal, do your part.”

The federal government will be forced to adopt much more stringent measures if a large number of people continue to disregard warnings to stay home as much a possible and isolate themselves.

“All options are on the table,” Trudeau said.