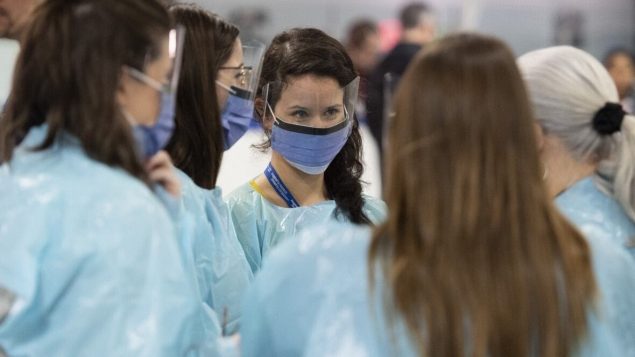 Healthcare workers at some Toronto hospitals are now being told to ration their surgical masks, according to memos obtained by CBC News. (Justin Tang/The Canadian Press)

In some some cases, the report says, nurses and other front-line staff are being urged to use a single mask for an entire shift.

The report, published today, is based on memos obtained by CBC News.

Ontario officials have denied that supplies are inadequate, and at his daily news conference today in Ottawa, Prime Minister Trudeau assured Canadians that health professionals would not run out of needed equipment.

The issue of equipment for healthcare workers is fraught with emotion as governments and workers must respond to the pressures of the growing COVID-19 crisis. 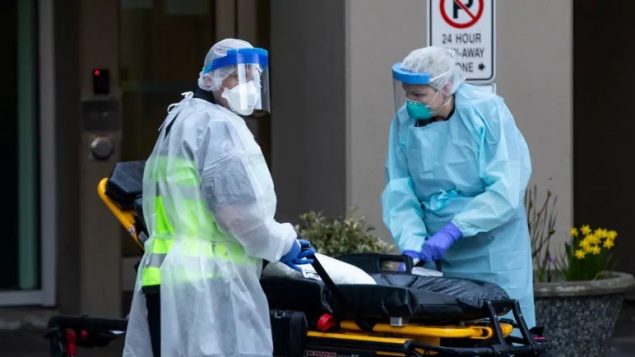 Paramedics wearing full body protective equipment clean a stretcher after responding to a call. Medical professionals are worried about shortages as the spread of COVID-19 ramps up. (Ben Nelms/CBC)

Last Friday, the federal government released a plan that would see companies ramp up production of medical supplies to cope with the growing number of COVID-19 cases.

The following day more than 2400 hospital staff took part in an Ontario-wide conference call sponsored by the Ontario Council of Hospital Unions (OCHU) focused on the impact of COVID-19.

When asked if they believed that the Ontario government has taken all the necessary steps to protect their safety and that of the people they care for at work, only 30 per cent said yes.

Asked if they had the personal protective equipment (PPE) to keep them and the people they care for safe at work, 77 per cent answered no.

And the the Registered Nurses’ Association of Ontario last weekend called on the provincial and federal governments to supply front-line health-care workers with more personal protective equipment, including masks, warning that there’s already a shortage at hospitals across the province.

Today’s CBC News report would appear to do little to ease workers’ fears.

It says a memo sent to staff at Mount Sinai Hospital on Monday said the facility is now issuing a single procedure mask to health-care workers each day, adding that a hospital source told CBC News that a nurse would typically go through five or six of these masks over the course of a 12-hour shift.

“It is important that we conserve procedure masks for the duration of this pandemic, which will go on for some time,” the memo reads. It also notes that masks must be discarded and replaced if they become soiled or contaminated.

“The main value of masking, like self-screening, is to keep the environment safe for all,” the notice reads, according to CBC News.

It said that as of Tuesday evening, all staff would only get two masks to wear over the course of their work period.

Unity Health spokesperson Jennifer Stranges told CBC News in an email that as of this time, Unity Health’s supply of protective equipment is “sufficient.”

“We are being conservative and using personal protective equipment rationally to maintain a safe environment for our patients, residents, staff and physicians,” she said.