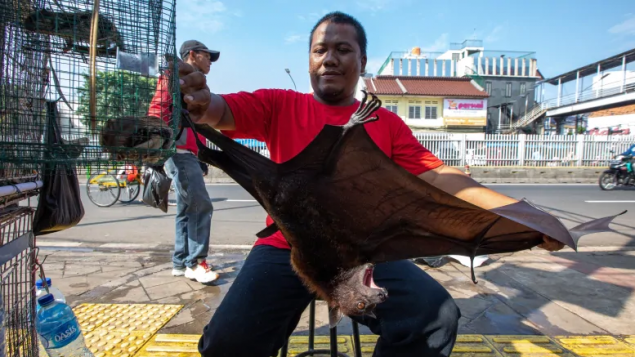 A bat is stretched out by a vendor at a market in Jatinegara, a district in Jakarta, Indonesia. Bats have been linked to viral outbreaks around the world, including SARS in 2002 and the recent coronavirus. Mike Boots, a disease ecologist and UC Berkeley professor of integrative biology. says "It is not random that a lot of these viruses are coming from bats. Bats are not even that closely related to us, so we would not expect them to host many human viruses. But this work demonstrates how bat immune systems could drive the virulence that overcomes this. (Aaron Gekoski/World Animal Protection)

Researchers are calling for countries around the world to close wildlife markets, also known as ‘wet’ markets.

These markets usually sell a wide variety of typically domesticated animals like pigs and chickens, with any number of wild animals including bats, civet cats, monkeys and so on.

These markets have been long-standing traditions in China, elsewhere in Asia and Africa.

Indeed one theory has the deadly Spanish flu of 1918-20 to have originated with Chinese labourers brought over to the Americas and Europe. 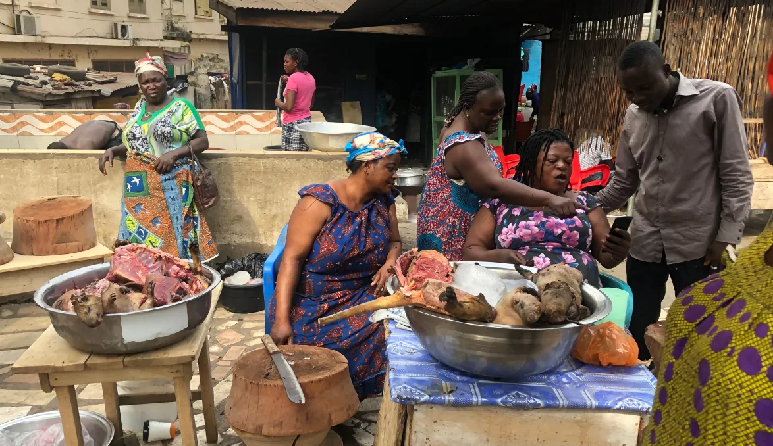 A ‘bush meat’ market in Ghana. Live and dead animals, many of them wild species, are sold side by side in these wet markets (World Animal Protection)

These wet markets and so-called “bush meat’ have been linked to previous mass disease outbreaks. These include Ebola, HIV, MERS, SARS, H1N1 (swine flu) and bird flu, the latest being COVID-19, another deadly disease which is suspected to have its origin in bats, which are not an uncommon commodity sold in these markets.

In a scientific study published in February, in Science Daily,  UC Berkely researchers noted how bats can drive virus mutation and fight it off at the same time.

“Some bats are able to mount this robust antiviral response, but also balance it with an anti-inflammation response,” said Cara Brook, a postdoctoral Miller Fellow at UC Berkeley and the first author of the study. “Our immune system would generate widespread inflammation if attempting this same antiviral strategy. But bats appear uniquely suited to avoiding the threat of immunopathology.”

After the SARS outbreak in 2003, which apparently originated in a wet market in Guangdong province, the Chinese government banned wet markets and the wildlife farming industry. But shortly after the World Health Organisation declared the outbreak contained, China lifted the bans. 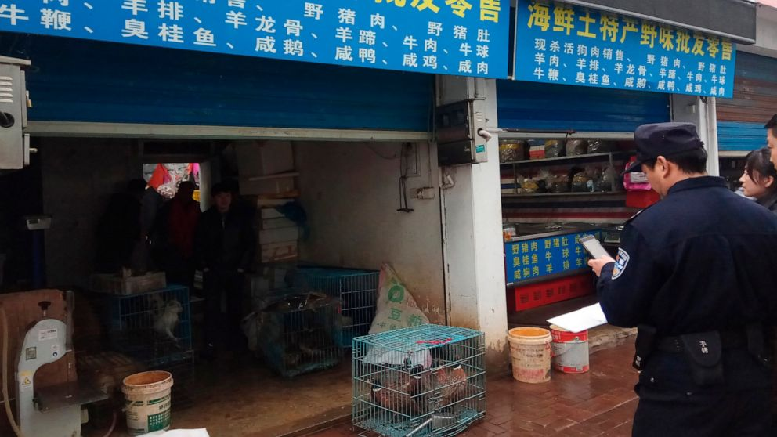 On Jan 9, 2020, members of a Chinese Anti-Poaching Special Squad, police gather outside a store suspected of trafficking in wildlife in the city of Guangde in central China’s Anhui province. China is enforcing a temporary ban on the wildlife trade to contain the outbreak of a new virus, but many are calling for a more permanent solution before disaster strikes again. (Anti-Poaching Special Squad via AP, File)

Bans have again been placed on these markets in China as of February, and also in Vietnam, but there are concerns about how well they are enforced, especially in more rural areas, and how long they may be in place.

In addition, with the bans it appears that online sales of animals are taking place, although attempts are being made to curb that practice,

In addition, with the bans it appears that online sales of animals are taking place, although attempts are being made to curb that practice.

Kerry Bowman, an assistant professor and bioethicist at the University of Toronto’s Dalla Lana School of Public Health

William Karesh, is executive vice president for health and policy at the EcoHealth Alliance,

a multi-national non-profit conducting research in emerging infectious disease. He is also quoted by the CBC suggesting that instead of immediately trying to stamp out all such trade and industry, the focus should be on first stopping trade in animals most likely to have infections more readily transmitted to humans, like bats, rodents, and primates.