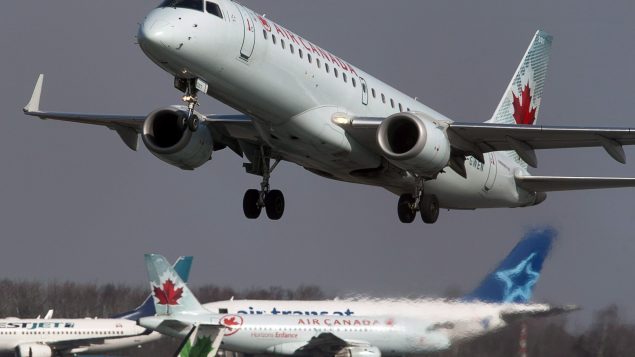 An Air Canada jet takes off from Halifax Stanfield International Airport in Enfield, N.S. on Thursday, March 8, 2012. Air Canada, which has cut roughly half its Canadian workforce, says it will apply for Ottawa's emergency wage subsidy program and retain or return affected employees to its payroll for the program term. (Andrew Vaughan/THE CANADIAN PRESS)

Air Canada announced Wednesday that it plans to rehire 16,500 workers it recently laid off because of the fallout from the COVID-19 pandemic provided the country’s largest airline qualifies for the federal emergency wage subsidy program.

In a statement released on Wednesday morning, the airline said it has been in discussions with federal officials to clarify certain aspects of the Canada Emergency Wage Subsidy (CEWS) announced by the federal government on Apr. 1. The news was first reported by The Toronto Star.

Originally the emergency wage subsidy was targeted only at small and medium-sized businesses, but it has since been extended to cover just about any Canadian company that has seen its revenues plunge by 30 per cent because of COVID-19.

“The Canada Emergency Wage Subsidy is an extremely important program to help employees and employers during this time of crisis, and as one of Canada’s largest employers most affected by COVID-19, we want to acknowledge the leadership of the government of Canada in introducing it,” Air Canada’s president and CEO Calin Rovinescu said in a statement.

“We are trying to keep as many of our employees as possible during the crisis and this measure will certainly help.”

The rehiring will be retroactive to March 15 and the wage subsidy program is expected to last until at least June 6.

Depending on wage levels, many furloughed employees will get a somewhat higher amount under CEWS than they would otherwise receive from Employment Insurance payments and they will maintain their health insurance and other benefits, Rovinescu said.

Once operations return to normal, Rovinescu said, the company will return “as many employees as possible to active status.”

The airline also said that all five of the Canadian-based unions that represent the company’s workers have signed off on the plan.

Air Canada previously announced that it will temporarily stop buying back its own shares as a way to conserve cash during the current crisis, and the company’s managers will also be getting reduced paycheques.

Members of Air Canada’s board of directors have agreed to a 25 per cent reduction, and all other Air Canada managers will have their salaries reduced 10 per cent for the second quarter, the airline said.