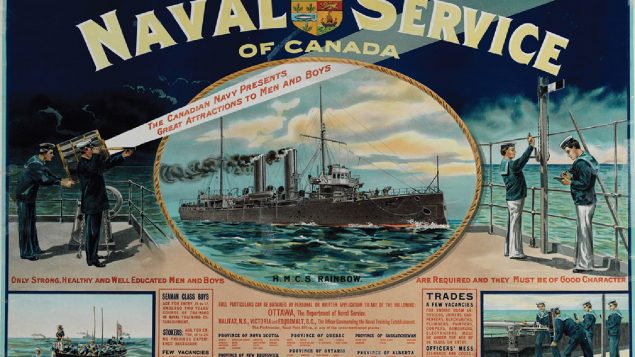 The Canadian Naval Service first recruiting poster 1910: "Naval Service of Canada. The Canadian Navy Presents Great Attractions to Men and Boys. Only Strong, Healthy and Well Educated Men and Boys are Required and They Must Be of Good Character. Seaman Class Boys – Age for entry, 15 – 17. Undergo two years of course of training at naval training establishment. Stokers – Age for Entry, 18 – 25. No previous experience necessary. Trades – A Few Vacancies for Engine Room Artificers, Joiners, Carpenters, Blacksmiths, Plumbers, Painters, Coopers, Armourers, Electricians. Must be under the age of 28 years on entry. Officers’ Mess – Stewards and cooks, under the age of 28, must engage to serve for 5 years. Full Particulars can be Obtained by Personal or Written Application to Any of the Following: Ottawa, the Department of Naval Service. Halifax, N.S., Victoria and Esquimalt, B.C., The Officer Commanding the Naval Training Establishment. The Post Master, Head Post Office at any of the undermentioned places. God Save the King." (RCN)

It began to be needed in the 1880’s with fisheries disputes with the Americans. But Britain had its own political concerns and did not want to anger the U.S. by getting involved  With Canada as a Confederation, Britain withdrew most of its military forces except for garrisons and ships at Halifax and Esquimalt to protect its own commercial interests in the north Atlantic and Pacific but left Canada relatively on its own to defend its border with the U.S.

Canada therefore created a pseudo-military Fisheries Protection Service in the 1890’s, to deal with American fishers and whalers while for border defence it had about 40,000 part time militia led by a permanent force of about 1,000.  In addition to some small armed coastal vessels the fisheries service eventually acquired a coast guard ship CGS Canada, a steel vessel of 910 tons. 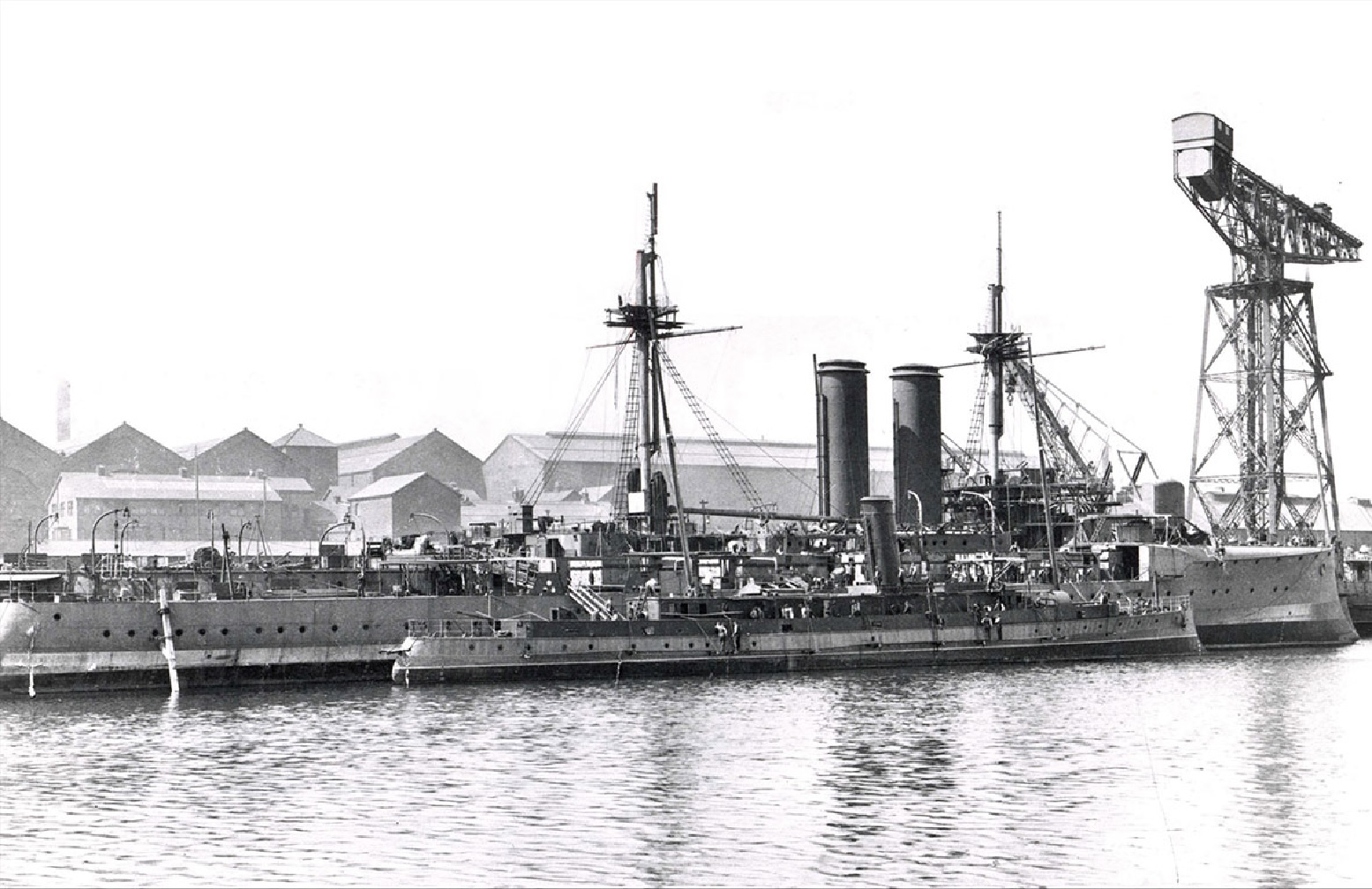 The future CGS Canada fitting out in the Vickers yard at Barrow-in-Furness, 1904, lying outboard of the much larger HMS Dominion,. CGS Canada would join a handful of small vessels in the Fisheries Protection Service (Royal Navy)

Canada’s later involvement in the Boer War at the turn of the last century led for calls for military reform, including creation of a naval military.

In 1908, Prime Minister Wilfrid Laurier proposed to create a navy, the idea supported by Britain which was being caught up in the “dreadnought war’ of huge battleship building with Germany and which wanted former colonies to be able to contribute their own forces as part of military alliance. Britain had also withdrawn its garrisons at Halifax and Esquilmalt. Like all things Canadian to do with the military and procurement there was scandal that the Fisheries Service was woefully inefficient and creating a navy would involve Canada in ‘imperial’ wars. 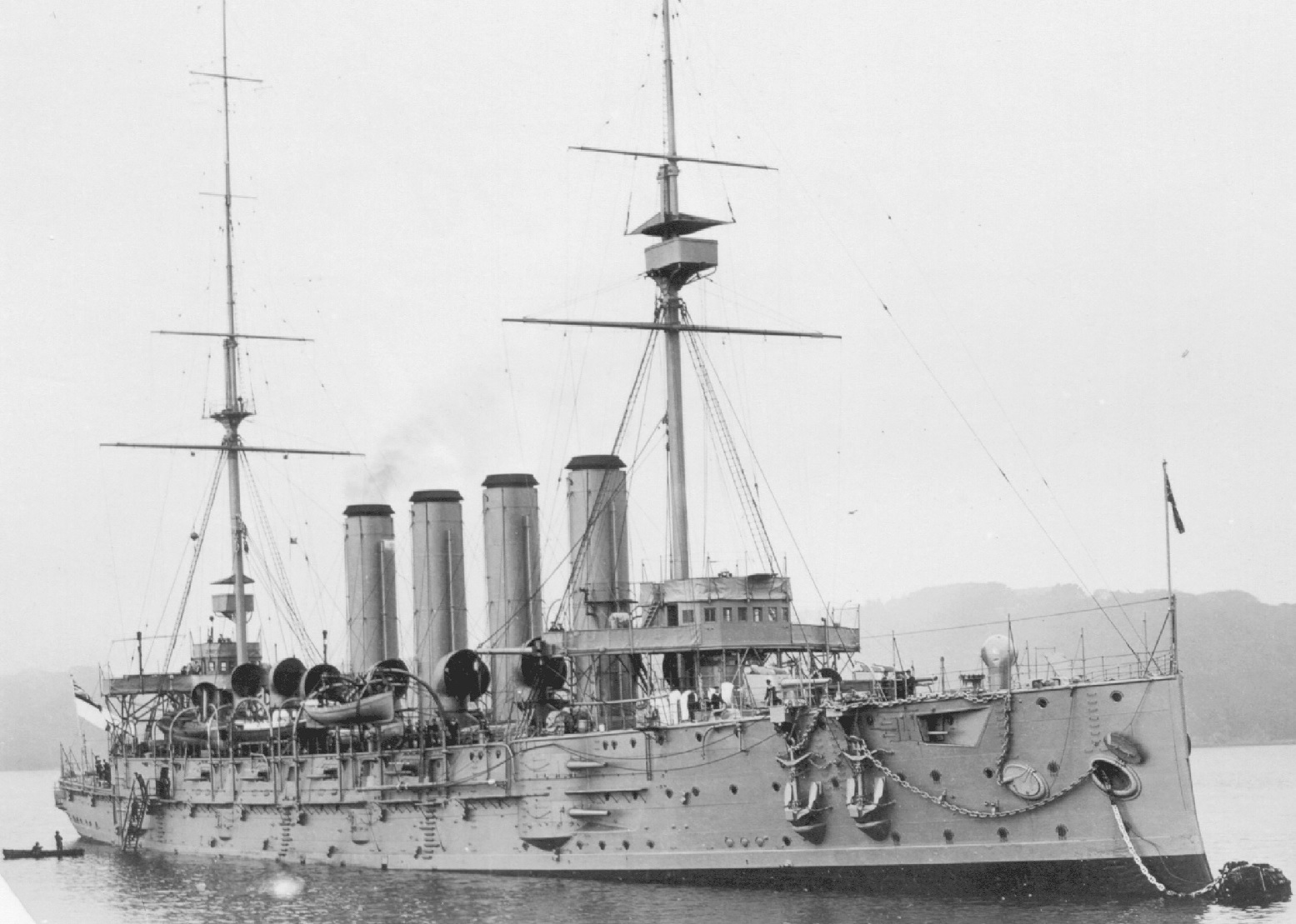 Nevertheless, plans for a navy went ahead and the Naval Service Act was proposed in January 1910, passed, and given Royal Assent on May 4, 1910, creating the Canadian Naval Service.  It was to be comprised of components of Marine and Fisheries—the Fisheries Protection Service, the Hydrographic Survey, Tidal and Current Survey, and the Wireless Radiotelegraph organization of coastal radio stations for ship to shore communications 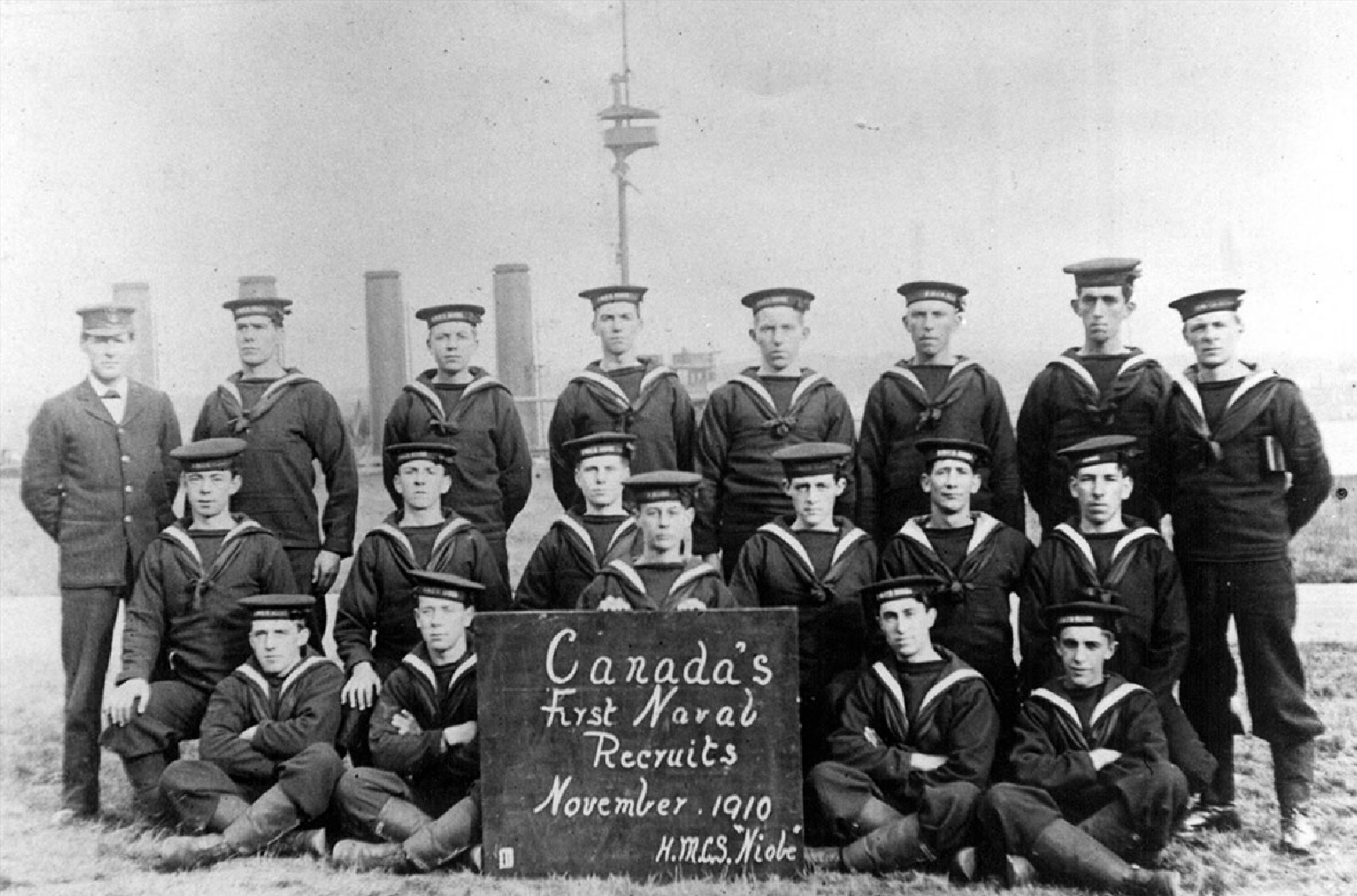 The first recruits for the Canadian Naval Service, 1910 with HMCS Niobe in the background ( RCN)

In 1911, King George granted the prefix “Royal” to the service.  Canada then acquired two aging cruisers from Britain, HMCS Niobe for Halifax, and HMCS Rainbow for Esquimalt. The following years were meagre though with budget cuts, until the First World War required a beefing up of the navy, although in reality the RCN contributed little to the war. 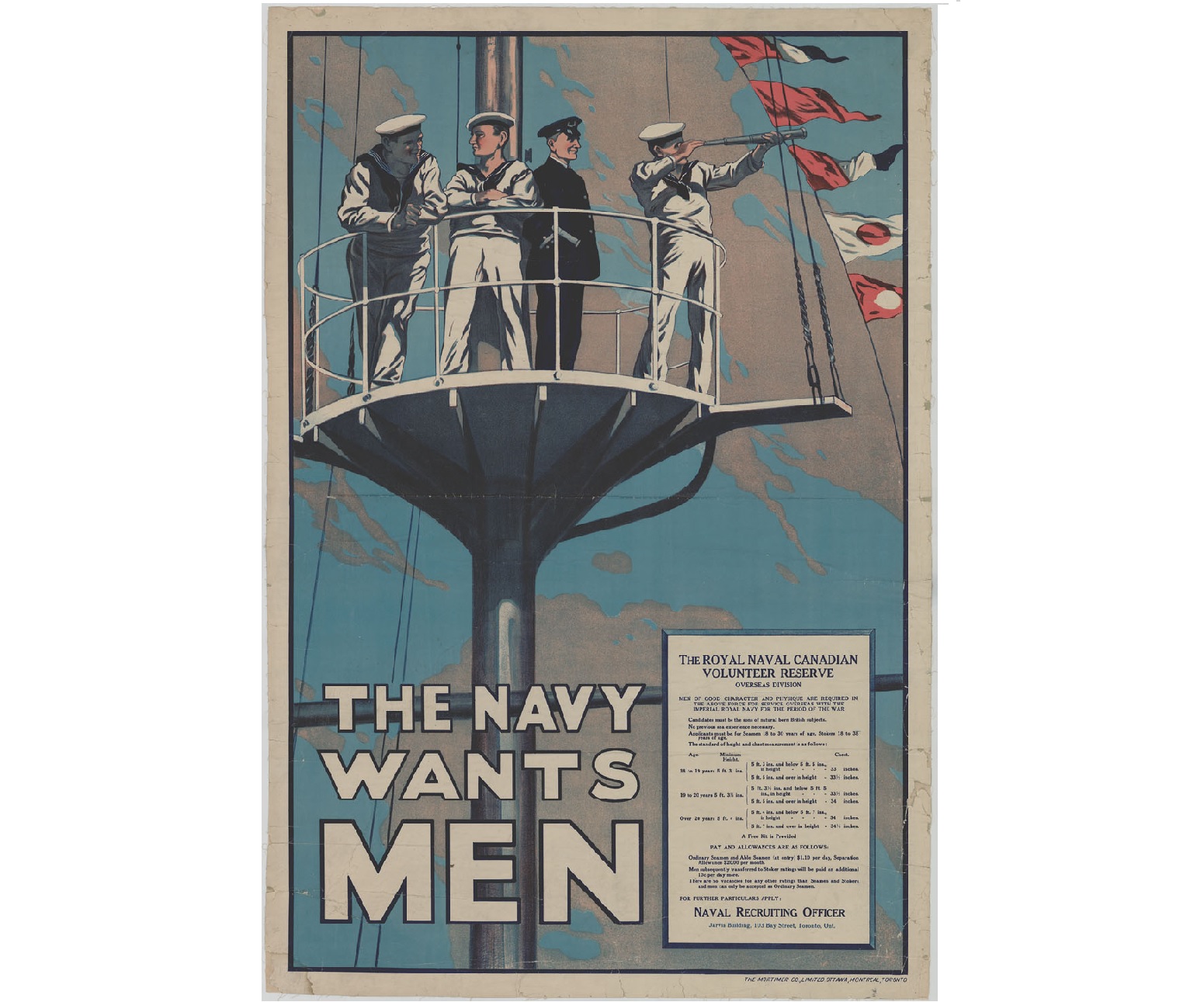 Post war the RCN was again drastically cut back, but was quickly built up for the Second World War, into a considerable fleet this time performing vastly important service in a variety of roles, not the least of which was the Battle of the Atlantic, the longest battle of the war. The RCN sank 42 enemy surface ships, and 33 submarines with a loss of 33 of its own ships.

From there the RCN fought in the Korean War and has continued as a small but vital service throughout the Cold War and on NATO and UN missions around the world..

It should be known that the first Sunday in May is commemorated as Battle Of Atlantic day, marking the end of the sea battle, the longest struggle of the war, which began in September 1939 and continued until the end of hostilities in 1945.  In a statement yesterday ( May 3, 2020) the Minister of Veterans affairs Lawrence MacAulay, and Harjit S. Sajjan, Minister of National Defence issued the following statement

“For almost six years, those serving in the Royal Canadian Navy, the Canadian Merchant Navy and the Royal Canadian Air Force guided and protected the Allied merchant vessels that crossed the North Atlantic in the face of great peril. By the end of the war, Canadian forces had escorted more than 25,000 merchant ship voyages from North America to Britain. Their tremendous courage and crucial contribution supported the eventual victory over the Axis forces in Europe.