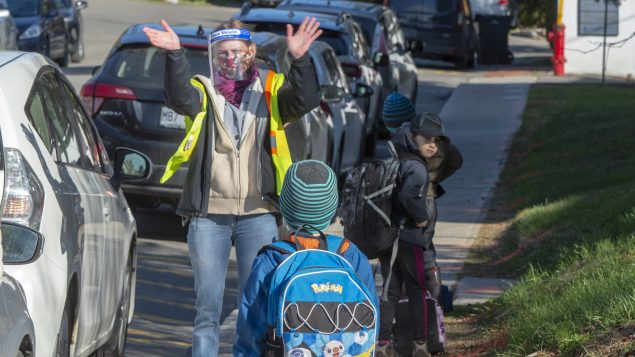 Teacher Janick Mille welcomes students at Ecole Marie Rose as elementary schools outside the greater Montreal area reopen Monday May 11, 2020 in Saint Sauveur, Que.. Schools and daycare centers have been closed due to the COVID-19 pandemic. (Ryan Remiorz/THE CANADIAN PRESS)

Tens of thousands of elementary school students in Quebec are going back to their schools today as the French-speaking Canadian province begins to gradually reopen its economy after a two-months lockdown prompted by the COVID-19 pandemic.

Quebec, which accounts for more than half of COVID-19 infections in Canada, is the first Canadian jurisdiction to widely reopen its schools after closing in mid-March.

However, schools in the Greater Montreal area, the epicentre of the pandemic in the province, will remain closed until May 25.

Even in the schools that open their doors Monday, attendance is not mandatory, and parents who wish to keep their children at home may do so.

It’s a far cry from the normal routine as schools have implemented a number of public health measures to prevent the spread of the virus.

A staff member will greet children with a bottle of hand disinfectant. Students will then go directly to their desk with their coats and boots — in order to avoid crowds in the hallways where they normally hang up their things. 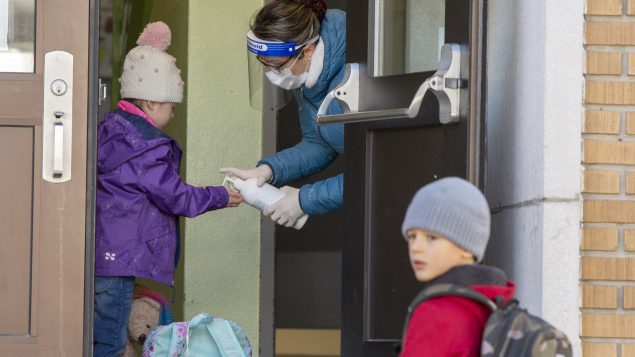 Students get their hands sanitized as they enter Ecole Marie Rose as elementary schools outside the greater Montreal area reopen Monday May 11, 2020 in Saint Sauveur, Que.. Schools and daycare centers have been closed due to the COVID-19 pandemic. (Ryan Remiorz/THE CANADIAN PRESS)

Class sizes are limited to 15 students and desks have been rearranged to create enough physical distance between children. Libraries and gyms will remain closed to prevent the spread of the virus.

Quebec Premier François Legault has been criticized by school boards as well as unions for what was seen by some as an “improvised” and hasty decision to move ahead with the reopening.

Some remain concerned the move is too early, in particular for daycares that are lacking staff and protective equipment.

But many others say it’s time for the children to return to school and reclaim a semblance of normalcy.

Quebec is also moving ahead with plans to reopen large swathes of its economy today, including the entire construction sector and manufacturing.

Provincial authorities are also moving ahead with lifting travel restrictions in some parts of the province, but the government is still asking Quebecers to limit themselves to essential travel only.

The provincial police checkpoints are being removed today in Abitibi-Témiscamingue, Outaouais, Saguenay—Lac-Saint-Jean and parts of the Mauricie.