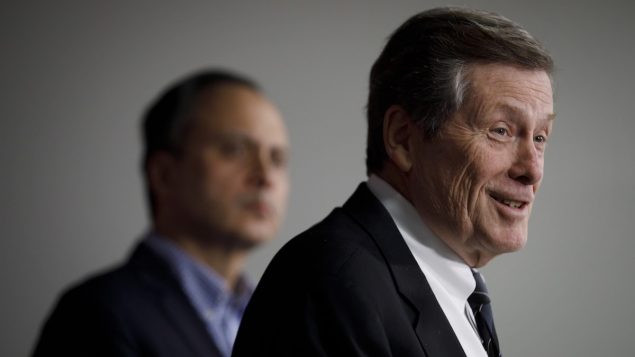 Toronto mayor John Tory speaks during a press conference to update media on a tentative deal reached between the City of Toronto and the city's outside workers, in Toronto, Saturday, Feb. 29, 2020. (The Canadian Press/Cole Burston)

In an effort to promote physical activity and increase space for walkers and cyclists, Toronto’s Mayor John Tory announced yesterday that the city is installing 57 kilometres of what they call “quiet streets,” as part of their ActiveTO plan.

Signs and temporary barricades will be installed at intersections to close the roads to everything except local traffic and create shared space for walkers, runners and cyclists.

“Today, we are moving ahead with creating more than 50 kilometres of Quiet Streets across the city and starting this weekend we will be closing some major roads near popular recreation trails and areas,” Tory said in a press release yesterday. “All of this represents both a quick start and a common sense approach to respond to areas where there is bike and pedestrian congestion right now.”

“Kensington Market is the perfect place to launch ActiveTO’s Quiet Streets,” said Mike Layton, a Toronto city. “As we reopen the vibrant businesses there, it’s critical we keep people safe by being able to maintain physical distance and make space for pedestrians and local residents.

Toronto’s health officials have also recommended closing major roads adjacent to trails throughout the holiday weekend to avoid crowding, and to allow people the space to practice social distancing.

The city of Toronto launched ActiveTO on May 6 as summer is right around the corner and as the city is looking to reopen and recover.