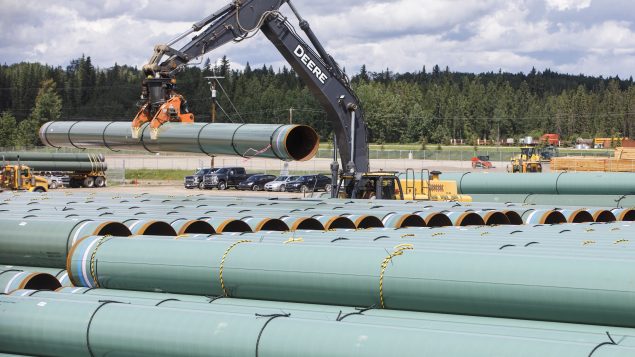 Pipe for the Trans Mountain pipeline is unloaded in Edson, Alta. on Tuesday June 18, 2019. The Trans Mountain Expansion project says it has reached another "key milestone" as it works to triple capacity of a pipeline moving oil from the Edmonton area to port in Burnaby, B.C. (Jason Franson/THE CANADIAN PRESS)

Work crews in the rugged interior of British Columbia have begun the construction of a contentious oil pipeline that will carry oil from northern Alberta to port terminals near Vancouver, the federal crown corporation in charge of the project announced Monday.

Trans Mountain Corporation said work on a seven-kilometre stretch of the pipeline has begun in the City of Kamloops and is expected to be completed in about seven months.

Ian Anderson, president and CEO of Trans Mountain Corporation, said the construction is “another key milestone for the Trans Mountain Expansion Project.”

The expansion of the 1,150-kilometre pipeline that currently carries about 300,000 barrels of oil per day from northern Alberta to the oil terminal in Burnaby, a suburb of Vancouver, is seen as critical for Alberta’s and Canada’s economy but has run into stiff opposition from some Indigenous and environmental groups, as well as the B.C. government.

“It is a good project that creates jobs, increases our market access and fits within our climate plan,” Ian B. Cameron, a spokesperson for federal Natural Resources Minister Seamus O’Regan, said in a statement to Radio Canada International.

“Every dollar we earn from this project will support the climate and clean energy solutions Canada needs.”

The federal governments recognizes and respects that some Indigenous communities disagree with the project, Cameron said.

“Our consultation process with Indigenous communities was one of the most comprehensive ever undertaken for a major project in Canada and that is why the Federal Court of Appeal unanimously upheld that process,” Cameron said. 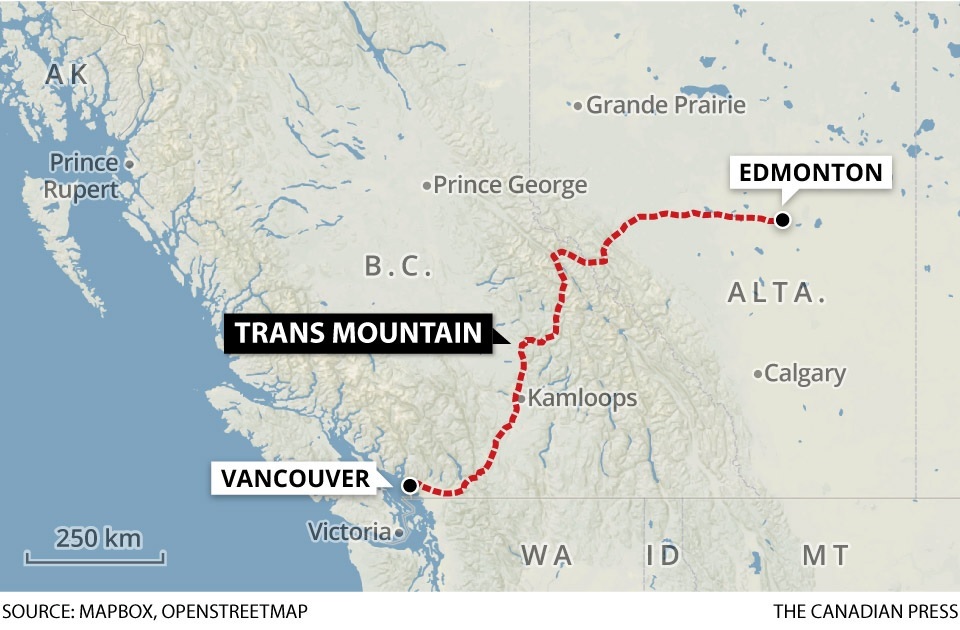 Anderson said about 50 people will be working on the construction site in June, but the workforce is expected to grow to about 600 people at peak construction in the late summer or early fall.

Construction spending in the Kamloops area is expected to be more than $450 million over the next two years, with additional workforce spending of more than $40 million.

Pipe installation began in Alberta late last year and the first section of pipe, near Edmonton, is 60 per cent complete, the company said last month.

The estimated cost of completing the entire expansion project was originally estimated at $7.4 billion, but Anderson said in February the budget had grown to $12.6 billion.

After expansion, Trans Mountain’s annual contribution to the City of Kamloops in taxes will increase by $1.2 million to $2.8 million, the company said.

Trans Mountain has signed a Community Benefit Agreement (CBA) with the City of Kamloops that will see a $700,000 contribution toward funding community projects.

Trans Mountain also has a partnership with Thompson Rivers University in Kamloops that will see a $500,000 contribution over 20 years toward funding annual awards for students in Trades, Social Work and Applied Research programs, and the Environmental Science graduate program, the company said in a press release.

“This Project will help us with our economic recovery plan and provide much needed benefits to our City,” said Kamloops Mayor Ken Christian.

“As we keep our Member’s interests at the forefront, Trans Mountain’s commitment to provide direct benefits to our community has resulted in training, employment, and contract opportunities for Tk’emlúps te Secwépemc members as well as provided support for needed community infrastructure upgrades” Chief Rosanne Casimir said in a statement.

Cathy McLeod, the Conservative MP for the area and her party’s shadow minister for Natural Resources (Forestry and Mining), said she was very pleased to see the start of the construction.

“This will provide much needed jobs and opportunities for the communities that have been severely impacted by the forestry downturn,” McLeod said in a statement to Radio Canada International.

Despite opposition from environmental groups and some Indigenous communities to the project, the vast majority of First Nations support the project in this area, said McLeod, who was also her party’s shadow minister for Indigenous and Northern Affairs from 2017-2019.

“My hope is that any demonstrations remain peaceful and respectful of the will of the majority and the rule of law,” McLeod said. “Obviously we will need to have special strategies related to COVID, but at the end of the day this is the safest way to transport oil products to market.”