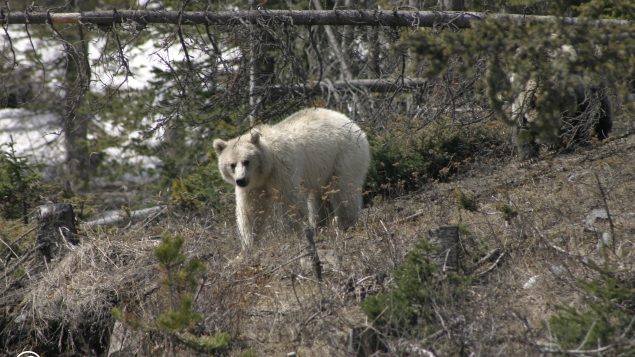 The very rare white grizzly bear has been named Nakoda, which means "Friend" or "Ally" in the language of the Stoney Nakoda Nation. (Photo courtesy of Parks Canada)

Visitors to Banff National Park in Alberta have been treated to the sight of a very rare white grizzly bear recently.

Parks Canada officials say the sub-adult grizzly and its more conventionally coloured sibling have been known to them since 2017 and have been spending their time between Banff and Yoho national parks.

The unique white colour of the grizzly is believed to be caused by a natural colour phase variation, they say.

“This colour phase variation is unusual for grizzly bears but has been seen before,” Parks Canada officials said in a statement to Radio Canada International. 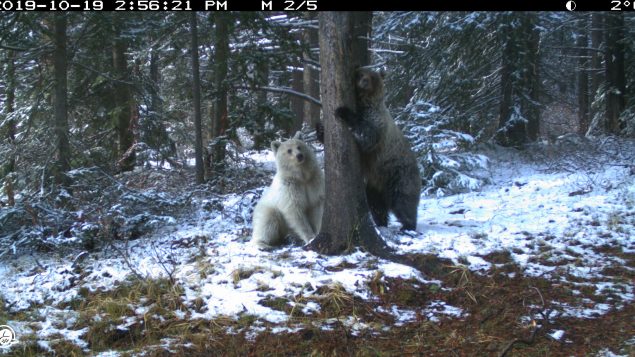 Nakoda and its sibling are about 3.5 years old have been spending time between Banff and Yoho national parks. (Photo courtesy of Parks Canada)

Grizzly bears are typically brown, black or blonde, however there have been records of grizzly bears with a white colour phase variation, they added

These grizzlies are believed to be about 3.5 years old and this will be their second year away from their mother.

The white grizzly has been named Nakoda, which means ‘Friend’ or ‘Ally’ in the native language of the three Aboriginal tribes of the area – Bearspaw, Chiniki, and Wesley – which are part of the Stoney Nakoda Nation. 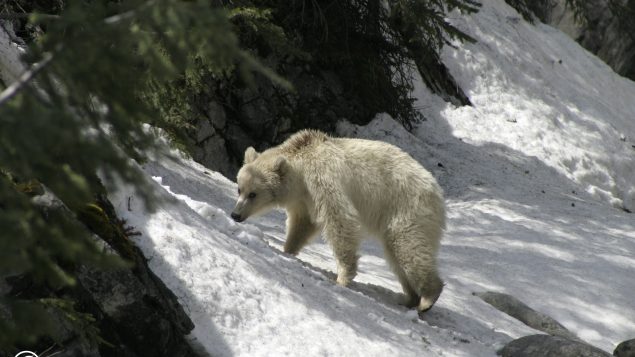 The unique white colour of the grizzly is believed to be caused by a natural colour phase variation. (Photo courtesy of Parks Canada)

However, Nakoda’s meteoric rise to bear stardom worries Parks Canada officials, who warn that observing wildlife in their natural habitat is “a privilege that comes with a responsibility to treat wildlife with the respect they deserve and need.”

“If you see wildlife near the highway, do not stop,” Parks Canada officials said. “When visitors see wildlife in other areas they should consider not stopping or, if safe to stop, always stay in their vehicles and give the animal space.”

Bears and other wildlife that become comfortable around people and roadsides are at greater risk of being struck by a vehicle, park officials warn.

Visitors are not allowed to feed wildlife in any national park, they say.

“The Agency takes a wide range of actions to prevent or reduce conflict between people and bears, to help ensure safety and well-being of both people and wildlife in our parks and sites,” Parks Canada officials said in a statement.

“This is a shared responsibility – we all have a role to play in keeping wildlife wild.”