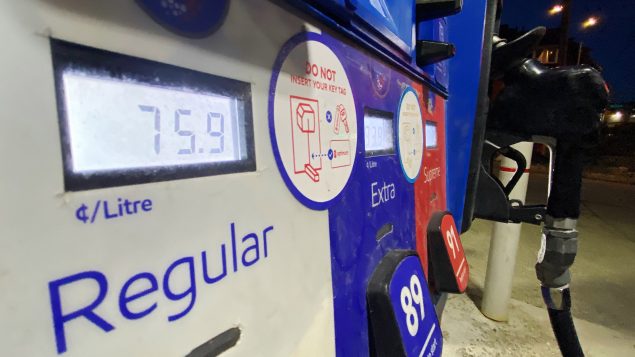 A pump shows the price per litre for regular gas at a gas station in Ottawa on Sunday, March 15, 2020. Gasoline prices rose 16.9% on a month-over-month basis in May after falling significantly in April (-15.2%) and March (-17.8%), Statistics Canada reported Wednesday. Despite the monthly increase in May, prices for gasoline were 29.8% lower compared with May 2019. (Adrian Wyld/THE CANADIAN PRESS)

Inflation rate falls to -0.4% in May, second month in a row below zero

Canada’s inflation rate fell 0.4 per cent on a year-to-year basis in May, as cheaper gasoline prices pushed inflation below zero for the second month in a row, the national statistics agency reported Wednesday.

Four of the categories the data agency tracks were down in May compared to last year’s level, including transportation, clothing and footwear.

Transportation prices contributed the most to the decline in the inflation, mainly because of lower gas prices compared with May 2019.

The other four were higher, including food and shelter costs. 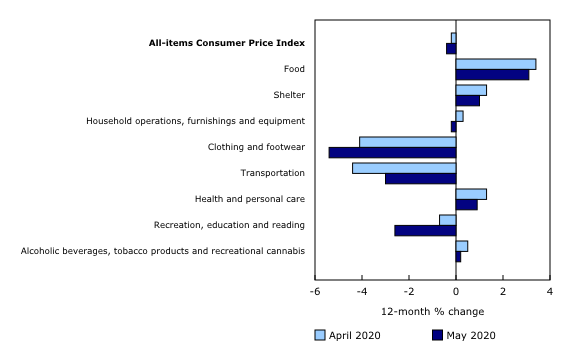 Food prices increased by 3.1 per cent in May, registering the largest year-over-year increase among the major components. Still the increase was less than expected given the depreciation in the Canadian dollar and issues with the food supply chain, said Royce Mendes, executive director and senior economist at CIBC Capital Markets.

The pandemic’s effects on the housing market also showed up in the report, with shelter prices falling, Mendes said in a research note to clients.

Rents declined for the second consecutive month in May, decreasing 0.8 per cent from April, Statistics Canada reported.

The mortgage interest cost index decreased 0.1 per cent on a month-over-month basis because of major commercial banks lowering their mortgage rates in response to falling bond yields and policy interest rate cuts from the Bank of Canada, the data agency reported.

This was the first monthly decline in the mortgage interest cost index since July 2017.

Consumers also received a break from cell phone service providers, which offered special incentives for both prices and usage in May.

Traveller accommodation prices were down 21.3 per cent compared with May 2019, the largest year-over-year decline on record, as pandemic-related travel restrictions and lockdowns practically shut down Canada’s tourism industry.

“The economic hit from COVID-19 and the lockdown are weighing heavily on consumer prices, which fell the most since the 2008-2009 financial crisis,” BMO economist Benjamin Reitzes said.

“With core CPI a few ticks below the Bank of Canada’s 2 per cent target and likely to fall further, policy rates look to be at the lower bound for some time.”