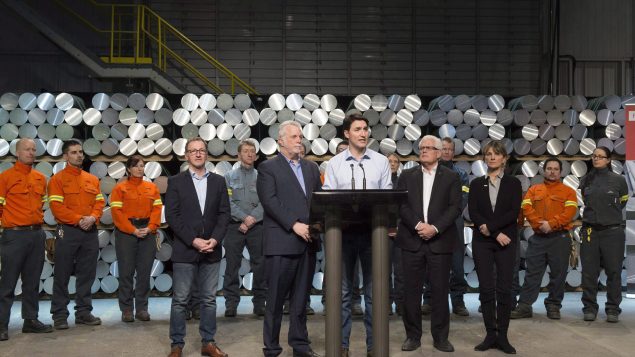 The federal government will “always defend Canada’s aluminum sector and its workers,” a Canadian official said Tuesday after Bloomberg reported that the Trump administration planned to reimpose tariffs.

If Canada declines to impose restrictions on its exports of aluminum to the United States, Washington will announce on Friday the re-imposition of 10 per cent tariffs on aluminum from the country, Bloomberg reported on Monday.

The possible punitive measures could be implemented by July 1, when the new U.S.-Mexico-Canada trade agreement is due to come into effect, the report said. The Canadian and U.S. aluminum industries are highly integrated.

Katherine Cuplinskas, a spokesperson for Deputy Prime Minister Chrystia Freeland, said the free flow of goods and services, including aluminum, is important for jobs and economic growth in both countries.

“We firmly believe that our aluminum exports do not harm the U.S. market. We are emphasizing this in our ongoing conversations with our American partners,” Cuplinskas said in a statement to Radio Canada International.

“We will always defend Canada’s aluminum sector and its workers.”

The United States imposed tariffs on Canadian and Mexican steel and aluminum imports in 2018 but removed them last year.

The American Primary Aluminum Association (APAA), which represents two of the last three remaining primary producers in the United States, says the surge of Canadian aluminum imports to the United States is threatening the viability of the domestic primary aluminum industry.

APAA CEO Mark Duffy called on the Trump administration to reimpose the so-called Section 232 tariffs on Canadian aluminum “to save American jobs.”

Aluminum Association president and CEO Tom Dobbins said U.S. trade action should focus on Chinese overcapacity rather than Canadian exports. Instead, the Commerce Department is granting so-called “exclusions” from the tariffs on massive volumes of aluminum including from non-market actors like China, he said.

“There are clear problems with the Section 232 program but efforts to ‘Blame Canada’ miss the mark,” Dobbins wrote in a recent op-ed. “To the extent the industry has seen a ‘surge’ in foreign imports in recent years, it has been in flat-rolled aluminum products from countries receiving Section 232 product exclusions.”