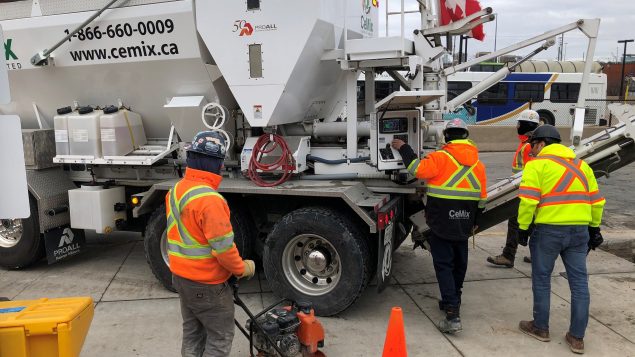 Workers get set to pour cement from a truck at the GO train station in Oakville, Ont., Tuesday, Jan.28, 2020. A new report by the Angus Reid Institute suggests the majority of Canadians support the idea of a shorter work week. (Richard Buchan/THE CANADIAN PRESS)

Half of Canadians would support 30-hour work week: poll

Support for the idea of a shorter work week is growing in popularity in Canada as the COVID-19 pandemic continues to upend the working lives of Canadians, according to a new study by the Angus Reid Institute.

More than half of Canadians (53 per cent) surveyed by the non-profit research centre said it would be a good idea to make a new 30-hour work week standard in Canada, the study found.

That’s a six-point increase compared to 2018 and more than twice the number of people who feel the present 40-hour workweek is just fine, the survey said.

Researchers at the institute speculate that the increase in support for a shorter workweek is perhaps driven in part by the COVID-19 pandemic and difficulties it has presented for many out of work Canadians.

Support for a shorter workweek is highest at the lowest levels of household income (64 per cent) and lowest among those with incomes over $150,000 per year (47 per cent).

Past Conservative voters are the most fervent in their opposition to the idea of a shorter workweek.

This group is most likely to say that shortening the work week is an ill-conceived idea, 40 per cent feel this way, while two-thirds of past Liberal and New Democratic Party voters voice support for the measure.

Ricardo Tranjan, senior researcher at the Canadian Centre for Policy Alternatives, said “30 for 40”, thirty hours work for forty hours pay, is an interesting notion, and one that should be widely discussed, even beyond the COVID-19 context.

Shorter working weeks would allow workers to participate more actively in their children’s education, spend more time caring for their own parents and engage in leisure and physical activities that would have a positive impact on their health, Tranjan said.

Ten additional hours at home could go a long way in alleviating “double shifts,” which burden women disproportionately more than men, he said.

“But I have two critical concerns,” Tranjan said. “First, this can’t happen unless wages are adequate. We would absolutely need to maintain the same wage levels for shorter weeks, but for some workers, that wouldn’t be enough.”

People who work 40 hours a week at the minimum wage are very likely to have household incomes close to the poverty line, he said.

“If we reduce hours for these workers, they’re likely to pick up extra shifts, hoping that will allow them to afford things like new winter jackets for the kids or more and healthier food for the family,” Tranjan said.

“Meantime, higher-wage workers will be enjoying all the benefits of shorter weeks, so we’ll be just exacerbating social inequalities.”

Tranjan said his second concern has to do with eligibility for income supports, which is often tied to working hours.

“For example, will employment insurance eligibility be reduced if weeks are reduced? Or will we end up with even fewer people qualifying for EI benefits?” Tranjan said. “We need to tackle these questions heads on, but we should continue to have this conversation.”

Business owners not buying it

Dan Kelly, president of the Canadian Federation of Independent Business (CFIB), which has more than 100,000 members, said it should surprise no one that the majority of Canadians like the idea of a four-day work week.

“The only people who would say no to such an idea are those that immediately recognize that this would likely require a 20 per cent reduction in their weekly pay or the massive unemployment that would occur if businesses were required to pay the same for fewer working hours,” Kelly said. “I would like six months of vacation and double my salary – that doesn’t mean it would be a reasonable request.”

Half of small Canadian businesses remain fully or partially closed due to the pandemic and most of those open now will be losing money every week they are open for months and months ahead, Kelly said.

Businesses have been hit with multiple months of lost productivity, rising debt and the costs of the personal protective equipment they now have to procure, Kelly said.

“Shorter work weeks at the same rate of pay for their staff would be an impossibility for nearly every business at this time,” Kelly said.

Twelve per cent of independent businesses report they are considering winding down or going bankrupt, he added.

“There could be 100,000 fewer small businesses before this is over,” Kelly said. “Let’s not push that number even higher.”