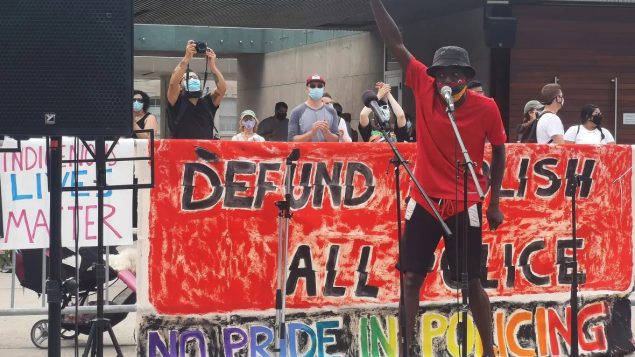 Desmond Cole, an author and activist, spoke at a rally, Sunday, asking the large crowd: 'If we didn't spend a billion plus on the Toronto Police Service, what could we do with the money?' (Kelda Yuen/CBC)

Pride Day in Toronto is marked by anti-racist protest

It was a Pride Day of a different sort Sunday in Toronto–marked by a virtual parade and a very real anti-police protest in front of City Hall.

Instead of tens of thousands singing and dancing their way through the streets of Canada’s largest city as they usually do, participants logged on to a series of virtual events–including a virtual parade–to take part in the hour-and-a-half celebration, wishing each other “happy Pride” in the corresponding chatroom.

Speakers and performers–including Halsey, Alanis Morissette and Jully Black–were there.

Others sent pre-recorded statements and videos showcasing their support for the LGBTQ+ community, as well as the anti-Black racism movement. 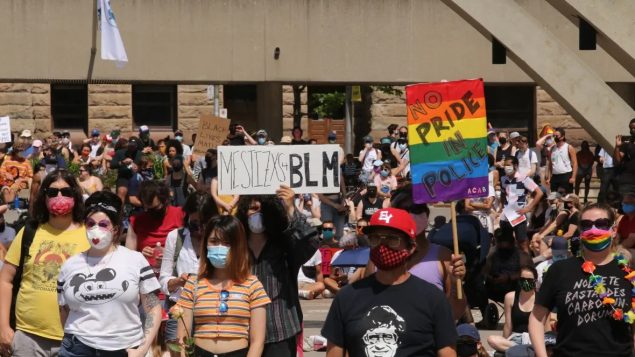 Protesters hold signs at a rally in Toronto’s Nathan Phillips Square on Sunday to show their opposition to police violence in Canada. (Michael Charles Cole/CBC)

Not bad for an event that wasn’t even supposed to happen this year after the city announced in March it was cancelling all major events and festivals, through June 30 to combat the spread of COVID-19.

But there was nothing virtual about the 1,000 people who gathered at Nathan Phillips Square, the forecourt of Toronto City Hall, at an event organized by the No Pride in Policing Coalition (NPPC), calling for a 50 per cent cut to the Toronto Police Service budget.

The No Pride in Policing Coalition, comprised of Black, Indigenous, People of Colour (BIPOC), queer and transgender groups, organized the event. It was called “Abolish Police in Canada: A Pride Rally and Teach-in.”

Beverly Bain, an organizer and coalition spokesperson, said the event was an attempt to take Pride back to its political roots and to call for the abolition of police services across the country. She said defunding is the first step. 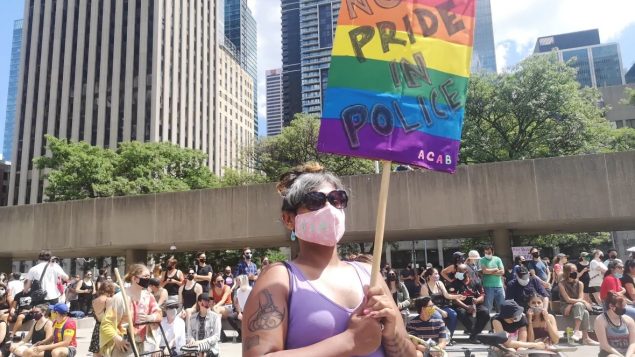 A protester holds a rainbow sign high in the air on Sunday in Toronto at the event, which was called ‘Abolish Police in Canada: A Pride Rally and Teach-in.’ (Kelda Yuen/CBC)

Bain told CBC News the killings of Black, Indigenous and brown people while in police custody, or in the midst of police wellness checks, are a pressing issue for two-spirit, lesbian, gay, bisexual, transgender and queer communities in Toronto.

It was the latest protest in Canada calling for an end to anti-Black and anti-Indigenious racism following the death of George Floyd in Minneapolis last month, as well as the deaths of Ejaz Ahmed Choudry in Brampton, Ont. and Regis Korchinski-Paquet in Toronto.