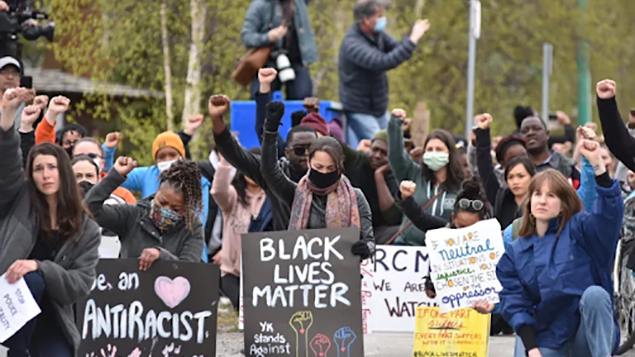 Demonstrators took a knee during the gathering on Tuesday, outside of Yellowknife's RCMP detachment. Some officers did, as well. (Walter Strong/ CBC )

Hundreds demonstrate in Yellowknife in solidarity with Black Lives Matter

Following a weekend that saw anti-racism rallies take place across the country, the Black Lives Matter movement reached the capital of Canada’s Northwest Territories on Tuesday.

Hundreds gathered in Yellowknife to protest anti-Black and anti-Indigenous racism with a march and motorcade through the capital’s downtown core. 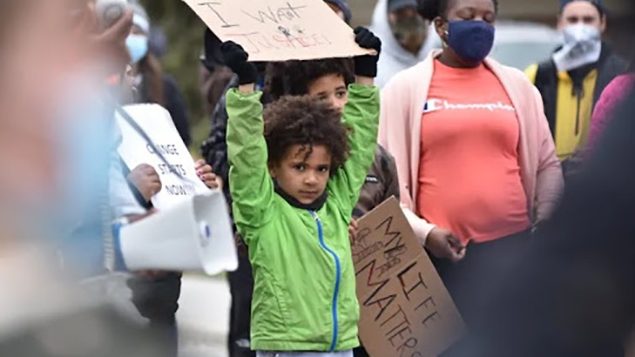 People of all ages joined in on the demonstrations. (Walter Strong/CBC )

The event was originally promoted solely as a motorcade, with speeches to be delivered online because of fears of COVID-19 spread.

But after hundreds gathered for a prayer and short speeches outside the Multiplex Arena a little before 2 p.m., organizer Ambe Chenemu told the crowd there was a “surprise.”

Protesters, he said, would be marching downtown toward City Hall and the RCMP station next to it–despite directions from the chief public health officer not to do so.

“If they have an issue with that, we’ll have that conversation,” said Chenemu. 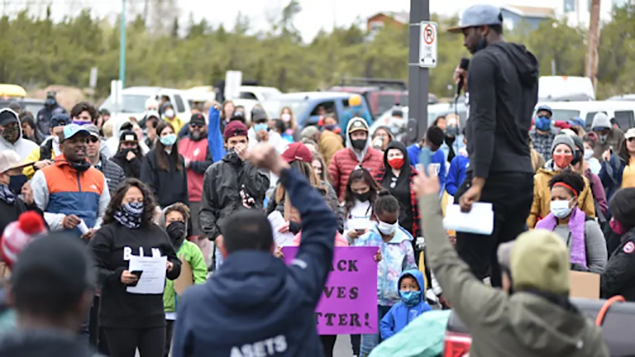 Organizer Ambe Chenemu spoke with the crowd ahead of the march on Tuesday. (Walter Strong/ CBC)

Demonstrators then marched down Yellowknife’s main thoroughfare, Franklin Ave., toward the RCMP detachment with some vehicles following.

There were chants of “no justice, no peace” and vehicles honked their horns in support.

In front of the RCMP station, the CBC’s Sidney Cohen and Danielle d’Entremont report, Chemenu, microphone in hand, led a chant of “enough is enough,” and called on RCMP to adopt body cameras and to make the footage publicly available.

At one point, Chemenu instructed demonstrators to take a knee and some of the RCMP officers did so, as well. 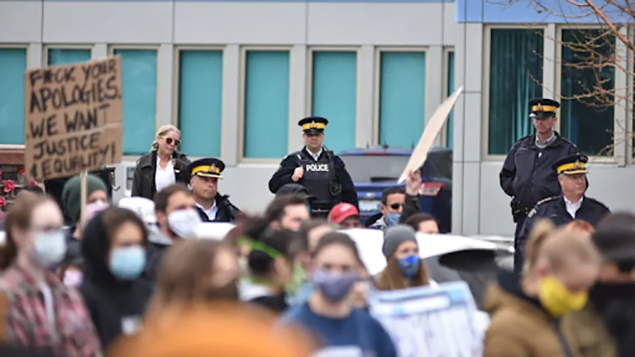 Some RCMP officers watched Tuesday’s demonstration, which took place in part outside of the city’s police detachment. Others took a knee in solidarity. (Walter Strong/ CBC)

There were also speeches from leaders in the city, including Ndilo Chief Ernest Betsina, who paid tribute to George Floyd.

“Let us continue to fight for equality and justice,” he said.

The demonstration came three days after protests were held in Whitehorse and Dawson in neighbouring Yukon on and some 60 demonstrators gathered in the N.W.T. town of Fort Smith. 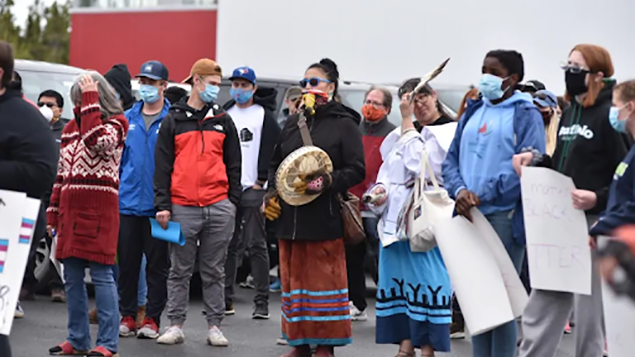 People gathered outside the Multiplex Arena on Tuesday ahead of the motorcade and march to City Hall and the RCMP station next to it. (Walter Strong / CBC)

And it came amidst growing signs of concern and dissatisfaction about the RCMP’s conduct in Canada’s Far North.

In a CBC interview on Monday, N.W.T. Premier Caroline Cochrane, termed the issue of racism “huge.”