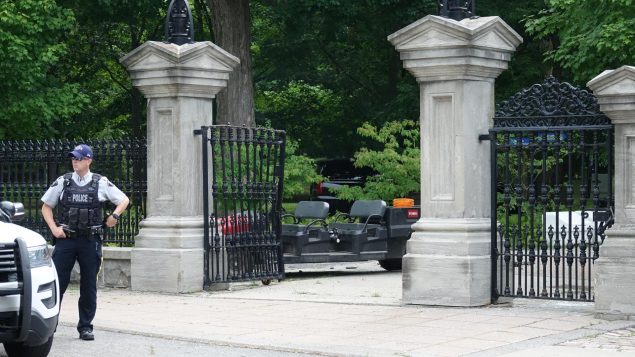 A gate leading to the grounds at Rideau Hall appeared to be damaged. (Francis Ferland/CBC)

Police in Ottawa have arrested an armed man after he rammed his pick-up truck into the gate of a park in the national capital that houses the Governor General’s official residence and the temporary residence of Prime Minister Justin Trudeau and his family.

Police were called at around 6:30 a.m. ET, after “a lone male breached the main pedestrian entrance of 1 Sussex Drive (Thomas Gate) with his vehicle which was disabled on impact,” said in a press release the Royal Canadian Mounted Police (RCMP), which provides security for the prime minister and the Governor General, the Queen’s representative in Canada.

“The armed suspect then proceeded on foot on the grounds of Rideau Hall to the greenhouse, an onsite structure with limited public access, where he was rapidly contained by RCMP members who were on patrol in the area,” the statement said.

While an RCMP officer began dialogue with the suspect, the RCMP National Division Emergency Response Team was also dispatched and arrived shortly after 7 a.m., the federal police force added.

The armed suspect was apprehended shortly before 8:30 a.m. without any incident and he was brought into police custody for questioning, the statement said.

“The RCMP is investigating and charges are pending,” RCMP said in a statement. “No further details are available at this time.”

(1/2) At approximately 6:40 this morning, an armed man was able to access the grounds of 1 Sussex Drive. The Prime Minister and the Governor General were not present at the moment of the incident.

(2/2)The man was arrested shortly after without any incident. He is currently in custody and is being interviewed. We are not releasing his identity at this time as charges are pending.

A source told CBC News the man had driven from Manitoba and had a long gun and a note with him. The source — who spoke on the condition they not be named because they were not authorized to discuss the case — did not know the details of the note nor what kind of long gun it was, CBC News reported.

Defence Minister Harjit Sajjan confirmed that the man arrested is an active member of the Canadian military while CBC has learned from defence sources that he is a Canadian Ranger.

The Canadian Rangers are a component of the Canadian Army Reserve that serves in the country’s remote and coastal regions, typically offering help with national security and public safety operations. 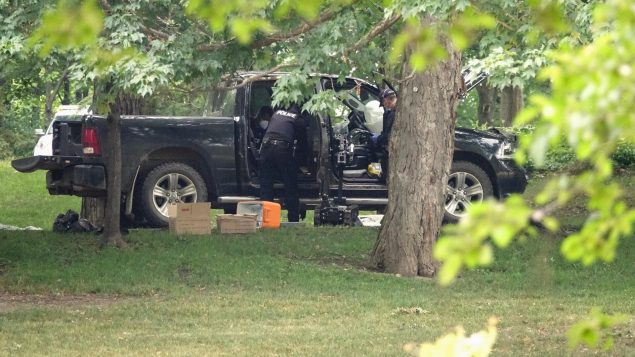 Officers could be seen inspecting the black pickup truck and items removed from the truck, including an orange cooler, on Thursday. (Francis Ferland/CBC)

Police were also seen examining the man’s pick-up truck. CBC News reported that police used a robot to open the door of the truck and remove several items from it, including an orange cooler and boxes.

The licence plate of the truck showed it was registered in the prairie province of Manitoba.

With files from Kimberley Molina of CBC News