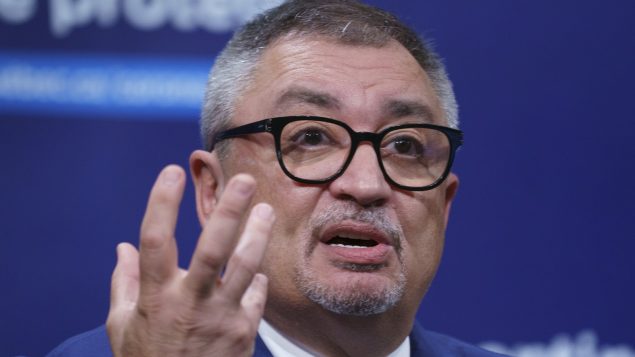 Dr. Horacio Arruda, Quebec's director of public health, responds to a question during a news conference in Montreal, on Tuesday, June 30, 2020. (The Canadian/Paul Chiasson)

The Quebec government is imposing a new set of regulations on bars and clubs, effective on Friday, according to an announcement from Quebec’s Health Minister Christian Dubé.

Under the new regulations, the last call for alcoholic beverages will need to happen at midnight, instead of 3 a.m. and clients must leave the bar by 1 a.m. Bars will be forced to operate at 50 per cent capacity, all clients will need to be seated at their tables, and no dancing will be allowed.

There will also be an increase in police presence around bars and nightclubs to make sure clients and bar owners are respecting COVID-19 guidelines.

“Those who think the pandemic is over are making a very serious error,” Dubé said. “By letting down our guard, we are putting the health and lives of people at risk.”

The new regulations come after Dubé said on Monday that the province would not hesitate to shut down bars and clubs if they did not comply with COVID-19 regulations after an outbreak was discovered on Montreal’s south shore.

Several people who attended Mile Public House, a bar in Montreal’s south shore, on June 30 had tested positive for the virus.

According to a press release from the Quebec government, a measure will also be put in place to ask clients if they are willing to sign a registry upon entering a bar in order to make contact tracing easier if there is an outbreak. The government added that any information given to the registry will be confidential in compliance with privacy regulations.

Quebec’s director of public health Dr. Horacio Arruda said that owners that do not respect the new regulations can face fines, or lose their permits.

With files from CBC News, Kate McKenna, and Radio-Canada