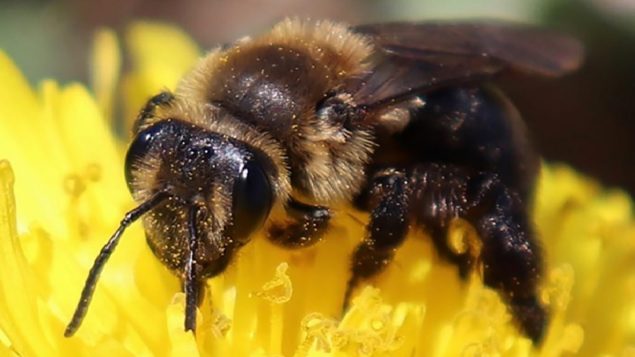 The wild bee species Andrena_vacinia, a miner bee, is one of the declining native bee species. Wild bees account for the vast majority of plant pollination including valuable food crops ( via York University- Toronto)

When people think of pollination, they most often are thinking of commercial honeybees. but they are in fact only a small portion of pollinators, and of bees.

Wild bees account for the majority of pollination including valuable crops, or about 87 per cent of the over 300,000 flowering plant species, and account for billions of dollars worth of benefit to humans.

Researchers at York University in Toronto and the University of New Hampshire studying pollinators in northeastern North America have published very worrisome statistics. Over the last 30 years there has been a 94 per cent reduction in pollinator networks over the study of the past 125 years through to today.

The study finds that 30 per cent of the networks were lost entirely, meaning the plants, or the  wild bees associated with them, or both.

In another 64 per cent the association between wild bee pollinators and native plants has been lost even though wild bees such as sweat bees, or miner bees or the native plants such as sumac and willow may both still be present in the ecosystem.

The new study by Professor Sandra Rehan of the Faculty of Science at York University in Toronto and grad student Minna Mathiasson of the University of New Hampshire in the U.S., was published in the science journal, “Insect Conservation and Diversity” under the title , “Wild bee declines linked to plant‐pollinator network changes and plant species introductions”. (abstract here)

It notes that these plant‐pollinator networks are in decline as they are “increasingly vulnerable to disturbance through intensifying anthropogenic land use and climate change”.

In a York University media statement Rehan added, “There are several reasons for the losses in the networks. Climate change is likely the biggest driver. We know that over the last 100 years or so annual temperatures have changed by two and a half degrees. This is enough to alter the time when certain native plants bloom. For a bee that’s out for months on end or is a generalist pollinator, this isn’t such a critical mismatch, but for a bee that’s only out for two weeks of the year and only has a few floral hosts, this could be devastating.”

Another reason besides climate change however is the introduction of invasive plants and bees, which have displaced native species. Rehan notes that several bee species live in the stems of plants and non-native species may have been brought in through imports of ornamental plants.

A previous study by Rehan and her team looking at 119 wild bee species over the same 125 year span found 14 in decline, with 8 declining.

The researchers say that habitat restoration and increase of native plants in agricultural situations are among the critical aspects of ensuring native wild bee survival.

Although not connected in any way to the study, some farmers are already quite aware of the situation. To that end for example, a number of potato farmers in the maritime province of Prince Edward Island are using some of their fields to plant a variety of flowering plants to benefit wild and domestic bees and other pollinators, calling them pollinator refuges. 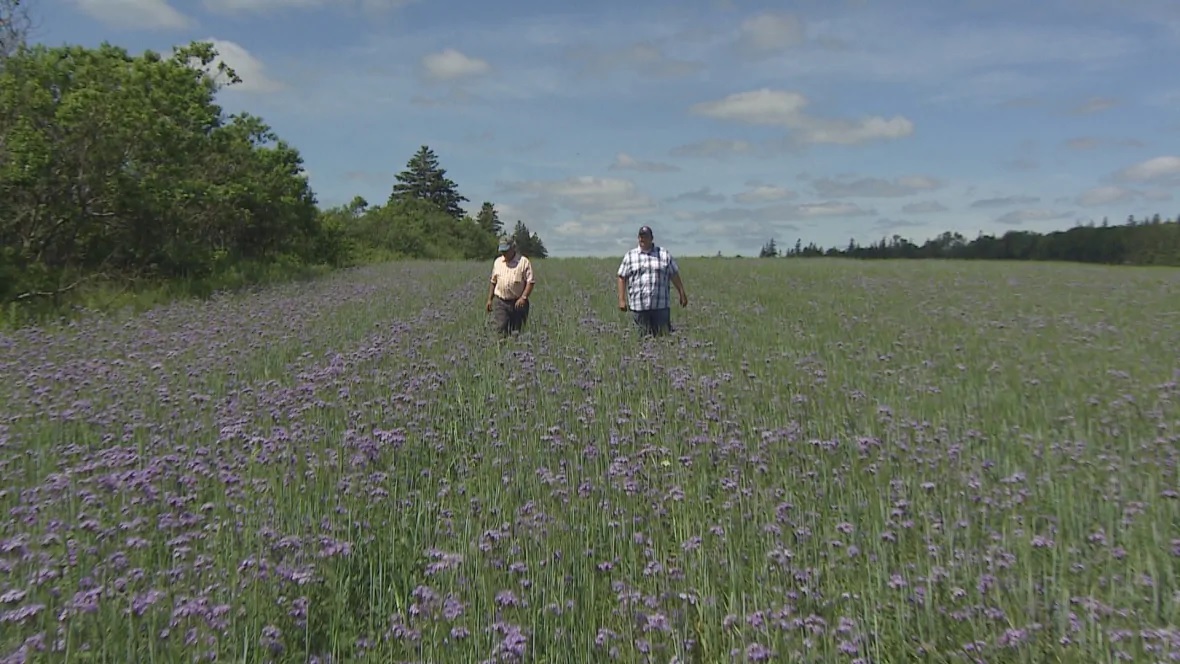 P.E.I. farmer Wayne Campbell (on left) walks through his pollinator refuge of flowering plants, The mix in Campbell’s field includes seven pollinator species, including barley, timothy, alsike clover, double-cut red clover, yellow blossom sweet clover, bird’s-foot trefoil and phacelia, which are the purple flowers. As the varieties blossom at diffenent times there are always flowers for the pollinators (Kirk Pennell/CBC)

Vernon Campbell of Mull Na Bienne Farms was quoted in the CBC saying, “In the refuge itself, it was just alive with bees later in the summer. You could almost hear them buzz when you were approaching, It made me feel good to be able to do something for the pollinators because they’re under extreme pressure, and in food production we need them”..