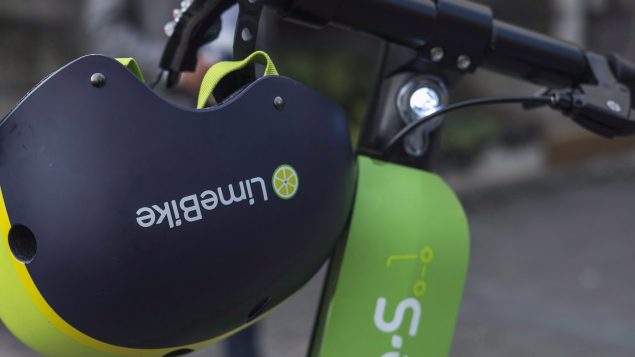 A branded helmet hangs off a motorized scooter during a demonstration of the Lime-S in Toronto on Thursday, Sept. 27, 2018. (The Canadian Press/Giordano Ciampini)

Shared electric scooters are going to be available to rent in Ottawa as part of a pilot project, the city announced in a press release on Thursday.

According to the press release, the electric scooter pilot project will run until the end of October with three providers, Bird Canada, Lime and Roll, and is designed to gauge public interest and evaluate safe and courteous riding and parking.

“The City looks forward to working with Bird Canada, Lime and Roll to provide a safe and enjoyable e-scooter program for residents and visitors,” the city said in a statement.

The scooters need to be parked in what the city is called the “sidewalk furniture zone” which is closest to the curb, in line with trees and bike racks.

This city is also asking people to report inappropriately parked scooters to the providers.

The scooters have a speed limit of 20 km/h and are not allowed on sidewalks, the National Capital Commission pathways, the city of Gatineau, on buses, trains and on streets with a speed limit of more than 50 km/h.

Scooters that enter these areas will slow down to a crawl and prevent users from parking them in said areas.

Other cities in Canada have also done pilot projects with shared electric scooters, but not all of them have fared well.

The city of Montreal recently banned shared electric scooters in February after they ran a pilot project on the account that users were improperly parking the scooters and not respecting the city’s rules for vehicles.