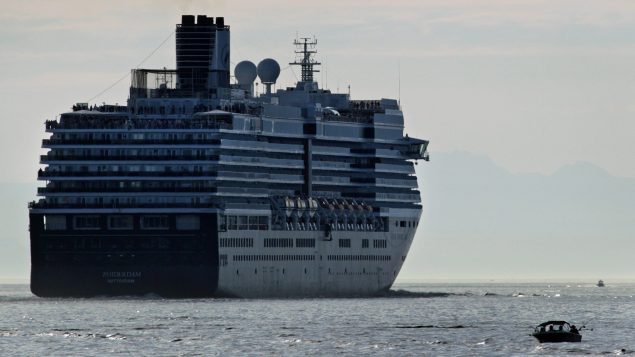 The effective cancellation of Canada’s 2020 cruise ship season due to the COVID-19 pandemic has saved British Columbia’s coast from exposure to billions of litres of pollution spewed by dozens of cruise ships that usually visit the Pacific Coast province, says a report by an international environmental group.

The report by Stand.earth released earlier this week, claims that more than 32 billion litres of sewage, greywater and washwater from scrubbers – systems designed to “scrub” exhaust fumes generated by the ship’s engines of harmful sulphur pollution – are dumped in Canadian coastal waters in the Salish and Great Bear seas every year by the cruise industry.

These discharges – with about 30 billion litres generated by the scrubbers – contain a variety of pollutants, including fecal coliform, ammonia, heavy metals and polycyclic aromatic hydrocarbons that are harmful to aquatic organisms and coastal ecosystems, the report says.

The report says that the cruise ship industry on the West Coast has exploded over the last decade.

In 2019, more than one million passengers and crew from 30 different cruise ships visited the Victoria cruise terminal during 256 ship calls on their way to and from Alaska, the report says. 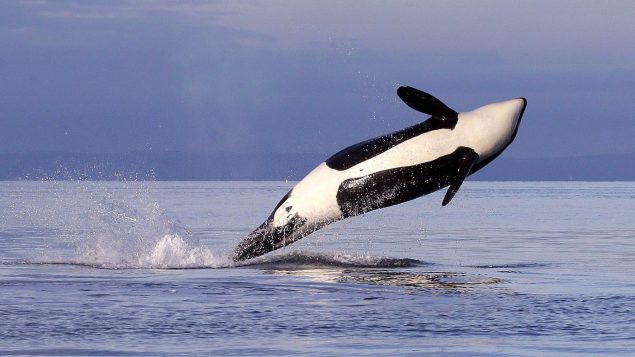 In this Jan. 18, 2014 photo, an endangered female orca leaps from the water while breaching in Puget Sound west of Seattle, as seen from a federal research vessel that had been tracking the whales. The endangered southern resident killer whales in the Salish Sea off the southern coast of British Columbia will see enhanced protections this year, the federal government says. (Elaine Thompson/THE CANADIAN PRESS/AP)

“For one season, B.C.’s coastal waters—and the at-risk populations of killer whales and sea otters, and the salmon, herring, and clam food sources and habitats on which they depend—were given a reprieve from billions of litres of harmful pollution,” the report says.

It urges the federal government to adopt stringent environmental control measures before allowing cruise ships back into the Canadian waters.

“If the federal government is truly committed to ‘building back better’ that means Transport Canada must act now to ensure stronger regulations so that cruise companies don’t continue to dump billions of litres of pollution on our coast,” said in a statement Anna Barford, a Canadian shipping campaigner at Stand.earth.

Dr. Judith Sayers, president of the Nuu-Chah-nulth tribal council, a non-profit organization that serves 14 Nuu-chah-nulth First Nations on Vancouver Island, said the amount of pollution discharged by cruise ships and the federal government’s lack of regulation are “highly disturbing.”

“The oceans are the breadbasket of the Nuu-Chah-nulth people. We are working with the federal government on a marine protected area but why protect areas of the ocean when this kind of dumping is occurring elsewhere?” Sayers said.

“We demand the federal government put stronger regulations in place immediately to stop this dangerous pollution in the sensitive ecosystems that sustain our sea resources, our breadbasket.”

A spokesperson for British Columbia’s Ministry of Environment and Climate Change Strategy said the provincial government is “always concerned about the state of our ocean environment and health of our coastal communities.”

“Will review the report with interest and refer any response to the recommendations to the appropriate federal authorities,” the spokesperson said. 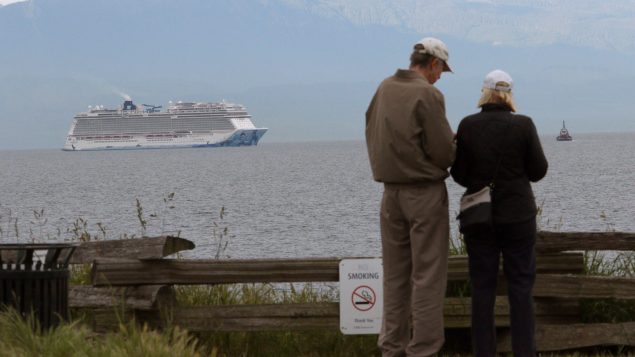 People look on as the Norwegian Bliss en route from Alaska to Seattle makes it’s way towards Ogden Point measuring in at 1082 feet with 4250 passengers and crew aboard is the largest cruise ship to ever dock in Victoria, B.C., on Friday June 1, 2018. (Chad Hipolito/THE CANADIAN PRESS)

Livia Belcea, a spokesperson for Transport Minister Marc Garneau, said they are reviewing the Stand.earth report and its recommendations.

Belcea said cruise ships with overnight accommodations allowed to carry more than 100 persons are prohibited from operating in Canadian waters until the end of October.

“As the COVID-19 situation continues to evolve, Transport Canada is working with other levels of government, industry stakeholders, Indigenous groups and Arctic communities, to reassess measures and ensure Canadians and Canada’s transportation system remain safe and secure,” Belcea said in an emailed statement.

Vessels operating in Canadian waters in this area can only burn fuel with a maximum sulphur content of up to 0.10 per cent. In order to meet this requirement, vessels can use exhaust gas cleaning systems (or scrubbers), including closed, hybrid or open-loop scrubbers, she said.

The IMO guidelines require continuous monitoring of a vessel’s washwater discharges for pH as a measure of acidity, polycyclic aromatic hydrocarbons as a measure of oil components, and turbidity as a measure of the amount of suspended solids in the water, Belcea said.

Treated sewage is only allowed to be discharged into Canadian waters after going through an approved treatment plant, she said.

“Usually, vessels that are going to Alaska are equipped with advanced wastewater treatment plants, which have the ability to treat sewage and result in effluent discharges that are of a high quality and purity that exceed regulatory requirements,” Belcea said.