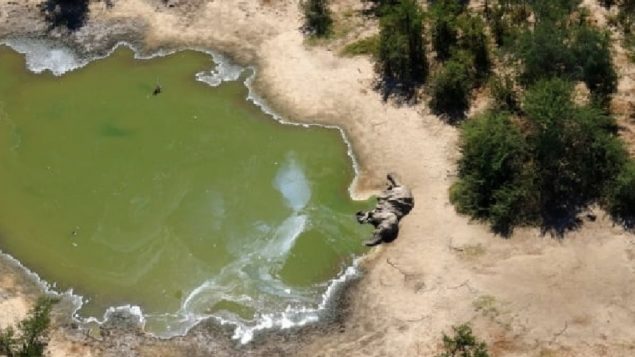 A dead elephant is seen in this undated handout image in the Okavango Delta, Botswana, May-June 2020. (Reuters)

What is killing Botswana’s elephants by the hundreds?

There’s a crisis in Botswana. Elephants are dying by the hundreds and nobody knows why.

Initial official reports have said over 200 of the majestic animals had died since carcasses began to be discovered two months ago. Conservationists now estimate the figure at over 400. There is some evidence elephants began dying as far back as March but only began to be noticed in May

The deaths are concentrated in the almost 5,000 square kilometre Okavango Delta. Poachers have been ruled out as the animals still have their tusks, as has poison as no deaths of scavengers have been noted nearby. Some of the elephants must also have died quickly as some have been found fallen on their faces. Drought which has resulted in deaths in the past is also not a factor.

Elephants Without Borders said earlier this month that in addition to dead animals it had reports of others that appeared weak and lethargic, disoriented and with trouble walking or limping.

Criticism has been levelled at Botswana’s government for its slow response in testing to determine cause of death. There is some fear that it may be a form of virus that could transfer to humans. Cyanobacteria in the water could also be a cause.

Criticism has also been levelled at the slow response to offers of international help. Experts have said delays in collecting samples means that evidence could be destroyed as the carcasses lay in the hot sun for days and weeks as well as from water sources, the soil, and plants.

The government said at a news conference on July 10 that it had preliminary evidence from lab tests performed in Zimbabwe but was waiting for confirmation from other labs in South Africa, Canada, and the U.S.

Results may be provided within the next week, Officials say they’re likely not dealing with an environmental disaster as the cause does not appear to have spread to elephants elsewhere in the country.

Dr Niall McCann is the conservation director for the National Parks Rescue, a U.K registered charity which patrols parks with armed rangers in efforts to combat poachers. Quoted by CBS News, he expressed deep concern calling the situation a catastrophe. “Until we know that this is no longer a danger to the herd, there is the prospect of Botswana’s entire herd being decimated”.

Chris Thouless is  head of research at Save the Elephants, Quoted by the Independent Online he said: “The patterns of mortality and symptoms do not appear to match any poison that has previously been used to kill elephants or any natural pathogen that has resulted in mass elephant mortality in the past”

Most deaths have been noted near the village of Seronga in the north of the delta, and near water.

Botswana is home to Africa’s largest number of elephants, estimated at around 130.000