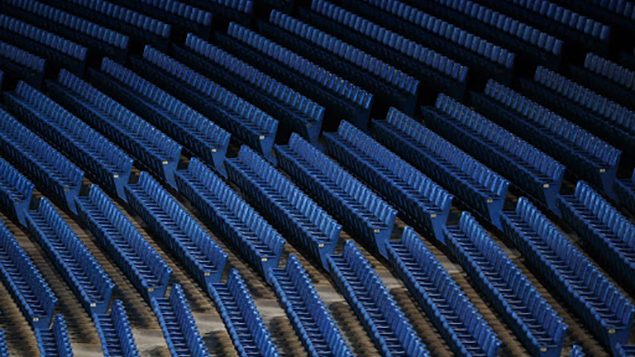 Empty seats are seen inside the Rogers Centre during batting practice for the Toronto Blue Jays at summer training in Toronto, Sunday, July 19, 2020. The Canadian federal government denied the plan to let the Toronto Blue Jays play at the Rogers Centre, their home field in Toronto throughout the COVID-19 pandemic. (The Canadian Press/Cole Burston)

The Canadian federal government has denied a plan to let the Toronto Blue Jays play at the Rogers Centre, their home field in Toronto throughout the COVID-19 pandemic, according to a statement from Immigration, Refugees and Citizenship Canada on Saturday.

The Blue Jays play in Major League Baseball, which decided to go ahead with a shortened 60 game season starting on July 23. The Blue Jays are set to play their first game on July 24.

The Canadian government was concerned with the constant cross border travel between Canada and the U.S., particularly with the Blue Jays playing in locations where the risk of virus transmission remains high.

“Based on the best-available public health advice, we have concluded the cross-border travel required for MLB regular season play would not adequately protect Canadians’ health and safety,” Marco Mendicino, the minister of immigration, refugees and citizenship, said in a statement.

“As a result, Canada will not be issuing a National Interest Exemption for the MLB’s regular season at this time.”

However Mendicino added that the Canadian government remains open to considering future restart plans for the post-season should the risk of virus transmission diminish.

The government of Canada had been in discussions with MLB over the last few weeks to develop a safe restart plan for play, while also putting in place strict health protocols and to manage the borders to protect the health of Canadians.

In a statement released on Saturday, Mark Shapiro, the Blue Jays’ president and chief executive officer said that from the onset of the discussions with the league and government officials, the safety of the community and their fans remained the priority.

“The club completely respects the federal government’s decision,” Shapiro said in the statement.

“Though our team will not be playing home games at Rogers Centre this summer, our players will take the field for the 2020 season with the same pride and passion representative of an entire nation. We cannot wait until the day comes that we can play in front of our fans again on Canadian soil.”

The statement added that the Blue Jays are currently in the process of finalizing the best home locations for the remainder of the 2020 season and will give an update as soon as it is possible.

With files from CBC News, and David Cochrane