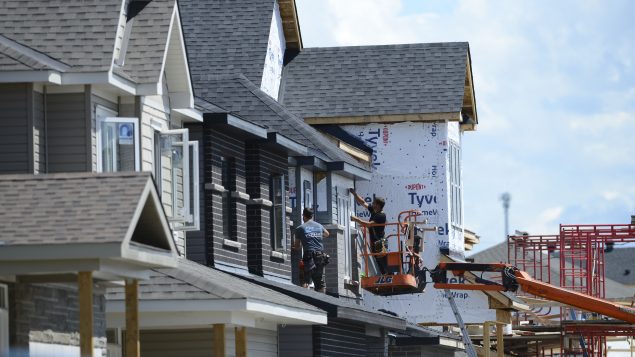 A new home is built in a housing development in Ottawa on Tuesday, July 14, 2020. (Sean Kilpatrick/THE CANADIAN PRESS)

As working from home becomes more prevalent due to the pandemic, Canadians seeking to buy new houses are increasingly likely to turn to larger single-family homes and away from condominium units, Canada’s national statistics agency forecasts in its latest report on new housing trends.

“Builders may start catering to buyers’ preferences by offering additional office space in the design of their new homes to accommodate remote working arrangements,” says the report by Statistics Canada released Tuesday.

The data agency says it expects to see continued home buyer demand in the more affordable areas surrounding Toronto and Vancouver and anticipates that this demand will strengthen if current pandemic-driven circumstances persist.

The report says its survey of residential builders showed increased sales volumes in June compared with a month earlier.

New house prices in St. Catharines–Niagara saw the largest increase (+1.0 per cent) in June in response to good market conditions in the region, the report notes.

“According to the Niagara Home Builders’ Association, increasing demand has been seen from Toronto-area buyers who are now working remotely or commuting to their Toronto offices only periodically,” the report says.

The Niagara region has also been attracting retirees looking to settle in this Canadian wine-producing region, it adds.

At the national level, new house prices rose 1.3 per cent in the 12-month period ending in June. This followed a 1.1-per-cent rise in May. On a year-over-year basis, prices have been increasing for seven consecutive months at the national level.

However, Canada’s capital Ottawa and its largest French-speaking metropolis of Montreal saw the largest year-over-year increases for the 12th month in a row, 10.4 per cent and 8.1 per cent respectively.

But it was the capitals of two oil producing Western provinces of Saskatchewan and Alberta that saw the largest decreases in new home prices in June. Prices declined by 4.4 Regina and 1.2 per cent in Edmonton, continuing a negative trend that began in 2018.