Last week, we had a first peek at the shortlist of Canadian artists that were selected by the jurors of the Polaris Music Prize, which was announced last Wednesday on CBC. Among the 10 albums that were considered the best of the country’s yearly production, based on their artistic values, we examined the first five, following the alphabetic order. Let’s look now at the last five contenders, and see why they were chosen. 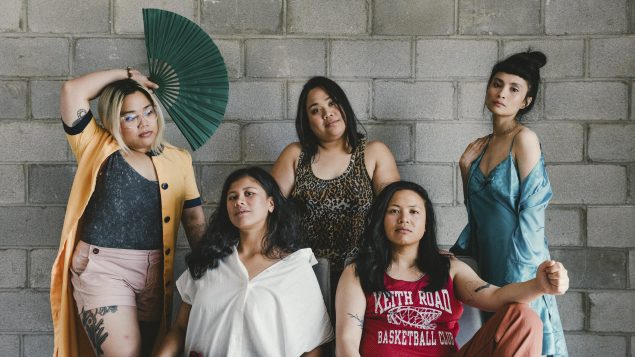 Here is quite a unique ensemble! Imagine five Filipino girls who mix traditional percussions, electronic music and Western pop influences, and sing in their native tongue, Tagalog, and in English. Their debut album bears the same name as the band: Pantayo, which means “for us”.

The main instrument, which looks like a xylophone, is called a kulintang, and is traditionally played by Indigenous groups for ceremonies or weddings. The girls also play several gongs and drums and their sound is initially surprising because it is atonal, meaning it is not in a specific key. “It is intriguing and catches your attention because it is so different,” commented CBC’s radio host Angeline Tetteh-Wayoe.

Based in Toronto, the young queer women describe themselves as a “supergirl gong group” playing “lo-fi R&B gong punk” and display a refreshing sense of humour, as seen on their video clip for the song “Heto Na,” inspired by OPM (Original Philipino Music) disco songs from the ’70s.

Colombia-born Lido Pimienta won the Polaris Music Prize in 2017 with her album “La Papessa”, which was totally self-produced, and all in Spanish – a first among Polaris winners. Both a musician and a visual artist, she followed up her initial success with a third album that she describes as “a cynical love letter to Colombia”. Written exclusively in Spanish, once again, of course.

Her album, “Miss Colombia”, is named after a televised incident when US host Steve Harvey mistakenly announced that Miss Colombia, Ariadna Gutiérrez Arévalo, had won the crown of the 2015 Miss Universe pageant, before crowning instead Miss Philippines. He then goofed again by misspelling the name of both countries in a tweet.

An outspoken social activist, Lido Pimienta has African and Indigenous background from Colombia and represents the strength of a new generation of Latino women who are able to keep their roots and blend into North American, Western society, imposing their voice in a white, Western environment where racism can be pervasive.

JESSIE REYEZ – Before Love Came To Kill Us

We already mentioned Jessie Reyez’s love for Toronto’s multicultural vibe last week, as well as her friendship with her DJ Junia-T, who was also shortlisted this year for the Polaris Music Prize. Her multiple collaborations with hip hop artists such as Calvin Harris or Eminem made her famous before she even released her first full album.

She achieved personal recognition in 2016 with the cathartic breakup ballad “Figures”, a multi-platinum hit in Canada that also led to a Juno Award for Breakthrough Artist of the Year two years later. Her first EP released in 2017, “Kiddo”, soon followed by the Juno-winning and Grammy-nominated “Being Human in Public” (2018), revealed a unique voice on the R&B, pop and hip-hop scene.

“Before Love Came to Kill Us”, Reyez’s first proper album, was released in late March this year and released each single track like a series of cinematic productions, highlighting her theatrical performance, like “Coffin”, featuring Eminem.

Canada harbours artists from Zambia, Colombia and the Philippines, but also from its southern neighbour, the United States. Raised in Chicago’s suburbs and established in Toronto since 2010, Meghan Remy, aka U.S. Girls, already has a long career “as a sound collagist and pop music obsessive”, according to the American music publication Pitchfork.

Despite the plural in its name, U.S. Girls first started a one-woman band. But her seventh album, Heavy Light, features 20 musicians, including Bruce Springsteen’s saxophonist Jake Clemons. Rising from the ashes after personal trauma, Meghan Remy sings about abused women, global heating, and political revolution, with interludes of people reflecting about their childhood experiences and exposing some past trauma.

From Patti Smith to David Bowie and rock opera, the influences are many on this album, with a mix of spoken word and songs that makes it a very personal object. The disco song “4 American Dollars” includes synthesizers and back vocals reminiscent of David Bowie’s “Young Americans”, and lyrics about the evils of capitalism.

“You can’t take money with you,” Remy told The Guardian. “But people want money, because it covers up all the stuff that should actually be your job, which is feeling, being curious, trying to know yourself, trying to know others.”

Also based in Toronto, singer-songwriter Ayo Leilani comes from the same generation of queer artists such as Lido Pimienta, who don’t want to be “stuck in one box” and end up gradually changing the game in Canadian music. Determined to make her voice heard, not only as a queer artist, but also as a member of the East African community, she co-founded a multimedia collective, that she describes as a “platform for a lot of young, queer, trans, gender non-conforming and non-binary people.”

The founder of her own label, Heart Lake Records, she is very active on the local cultural scene, and sits on the Toronto Arts Council board. In 2018, she self-produced her first album, “The Golden Octave” with Francesca Nocera, aka DJ SunSun, her partner in music and in life.

Her second album “DNA Activation” is a fusion of Ethio Jazz, R&B, and Hip-Hop, with songs sung in English, and Ethiopian languages Amharic and Tigrinya. Co-produced with Sun Sun, each song of the album is named after Witch Prophet’s family members, and is inspired by biblical stories and East African myths.

Why her moniker? “I don’t study witchcraft, but I believe in magic,” she told Red Bull Academy’s Max Mertens.  “The term ‘prophet’ for me rang true because I have a lot of prophetic dreams. I write a lot of my dreams down and 80% of them come true in a way.”

A cinematic tribute to shortlisted artists on Oct. 19

Given the ongoing COVID-19 pandemic, there will be no gala for the Polaris Music Prize when the big winner is announced on October 19, but the event’s organizers announced last week they would celebrate the shortlisted artists during “a special cinematic tribute”, to be broadcast in Canada on CBC Gem, CBC Music’s Facebook, Twitter and YouTube pages and around the globe at cbcmusic.ca/polaris.

The Polaris Music Prize awards $50,000 to the artist who creates the Canadian Album of the Year, judged solely on artistic merit, without consideration for genre or record sales. Additionally, the nine other nominated acts whose albums make the 2020 Short List will receive $3,000 each courtesy of Slaight Music.