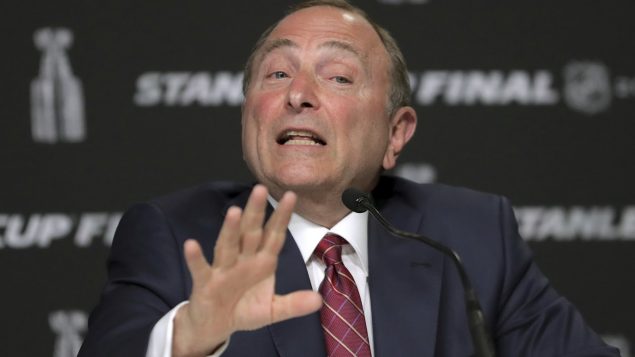 In this May 27, 2019, file photo, NHL Commissioner Gary Bettman speaks to the media before Game 1 of the NHL hockey Stanley Cup Final between the St. Louis Blues and the Boston Bruins in Boston. The National Hockey League detailed what the hub cities, Toronto and Edmonton, will look like under their return to play plan in a video presentation on Thursday.(AP Photo/Charles Krupa)

The National Hockey League detailed what the hub cities, Toronto and Edmonton, will look like under their return to play plan in a video presentation on Thursday.

What will life be like in the Secure Zone?

The NHL today shared a comprehensive video presentation with details on the upcoming #StanleyCup Qualifiers and Playoffs, ahead of a Q&A with media on Friday: https://t.co/x3j55fp9Vf pic.twitter.com/QMRlAxI3UJ

In Toronto, the bubble is separated into two areas, one in Exhibition Place, and one in downtown Toronto. It will contain 14 restaurants, bars, and coffee shops, 8 tennis courts, movie theaters, golf suites, and fitness studios, 12 dressing and medical rooms, and four practice facility ice rinks, three of which are NHL sized, and one Olympic sized rink. The Toronto bubble also includes BMO Field for outdoor recreational activities.

“It involves LED screens and monitors and stages. The in-ice presentation is also unique to the Stanley Cup Playoffs. We’re really excited about this.” – NHL Chief Content Officer Steve Mayer on the in-arena looks for Edmonton and Toronto starting Aug. 1. https://t.co/x3j55fGKMN pic.twitter.com/ZLYtAqMODs

NHL Chief Content Officer Steve Mayer said that the in-ice presentation will be unique to the Stanley Cup playoffs, and will include LED screens, monitors and stages.

“We’re going to bring these arenas to life through the art of video and audio and lighting,” Mayer said.

The NHL also said that it has partnered with video game developer and publisher EA Sports, to use its catalog of in-game sounds in order to imitate the sound of crowds when the playoffs start on Aug. 1.

In terms of testing, the NHL has partnered with LifeLabs in Toronto and DynaLife in Edmonton to conduct daily tests with the results becoming available in 24 hours.

In the video, NHL Commissioner Gary Bettman said that the league has been following the advice of medical people and the provincial and federal governments to make sure they’re doing the right things.

“Paramount in everything we’ve done to date, and everything we’ll be doing moving forward, is the health and well being of all NHL personnel starting with players and coaches and all of the supporting people that are necessary for us to play our games,” Bettman said.

The NHL had paused the season on March 12 due to health concerns surrounding the COVID-19 pandemic. Earlier this month, the NHL and the National Hockey League Player’s ratified an agreement on a return to play plan.