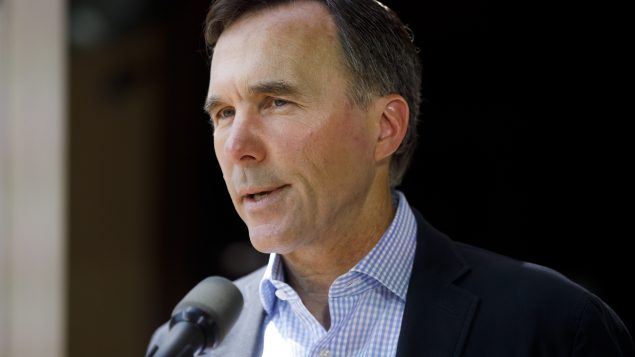 Finance Minister Bill Morneau speaks to media during a press conference in Toronto, Friday, July 17, 2020. In the wake of revelations that Morneau and his family participated in trips overseas sponsored by the WE organization, Canada's Ethics Commissioner Mario Dion has announced that he is expanding the scope of his investigation into the finance minister's handling of the WE Charity contract. (Cole Burston/THE CANADIAN PRESS)

Ethics commissioner expands probe into finance minister over WE scandal

Canada’s Ethics Commissioner Mario Dion says he is broadening the scope of his inquiry into a multi-million contract awarded by the minority Liberal government to WE Charity by taking a deeper look at the actions of Finance Minister Bill Morneau.

In a letter addressed to New Democratic Party MP Charlie Angus on Wednesday, Dion confirmed he would be expanding the scope of the ongoing investigation into Morneau’s actions to also probe whether the finance minister’s acceptance of travel gifts from WE Charity and failure to report them violated the Conflict of Interest Act.

Ethics Commissioner has responded to my request to expand the investigation into @Bill_Morneau
He will look into breach of section 11 and Section 22 on receiving gifts and not reporting.
Section 52 would result in monetary penalties. pic.twitter.com/ojy3WzdgH0

Dion’s office launched an investigation into Prime Minister Justin Trudeau on July 3 to examine whether the Liberal leader, who had close family ties to WE Charity, had breached federal conflict of interest laws by awarding the charity a sole-sourced contract to administer a $912-million student volunteering grant program.

It also emerged that WE Charity had paid Trudeau’s mother and brothers, Margaret and Alexandre Trudeau, nearly $300,000 in speakers fees for their participation in various WE Charity events over the years.

The investigation was later expanded to include Morneau, after it emerged that the finance minister, who also had close ties with WE Charity, did not recuse himself from cabinet discussions on awarding of the contract for administration of the Canada Student Service Grant.

Morneau’s problems grew bigger Wednesday over his repayment of $41,000 in WE-sponsored travel expenses for family trips three years ago.

“Please note that I have expanded the scope of my examination to include subsection 11(1) of the Act, which prohibits a public office holder or a member of their family from accepting gifts that may reasonably be seen to have been given to influence the public office holder in the exercise of their official powers, duties or function,” Dion wrote in the letter to Angus.

Dion said he will also be looking into whether Morneau may have contravened section 23 of the Conflict of Interest Act by “failing to disclose these gifts,” which “pursuant to section 52 of the Act, may result in the issuance of an administrative monetary fine.”

Trudeau and his chief of staff Katie Telford are slated to appear before the House of Commons Finance Committee today.