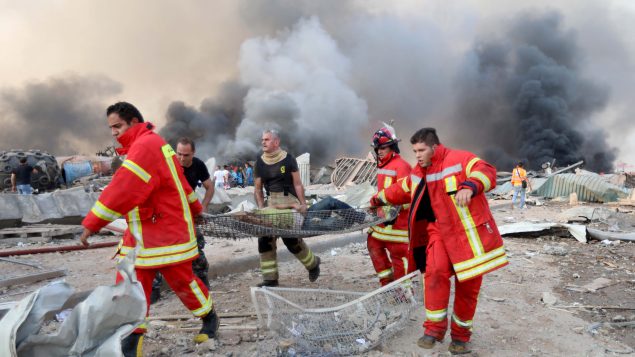 A man is carried out on a stretcher at the site of an explosion in Beirut, Lebanon Aug. 4, 2020. (Mohamed Azakir/REUTERS)

Foreign Affairs Minister Francois-Philippe Champagne said Canada is ready to assist Lebanon “however we can,” following a huge blast that rocked Beirut on Tuesday, flattening much of the port, damaging buildings across the Lebanese capital and sending a giant mushroom cloud into the sky.

At least 70 people were killed and 3,000 injured. But with many bodies buried in the rubble, officials expected the death toll to climb higher.

Hours after the blast, ambulances still carried away the wounded as army helicopters helped battle fires raging at the port.

The sudden devastation overwhelmed a country already struggling with both the coronavirus pandemic and an economic crisis: Beirut hospitals quickly filled beyond capacity, pleading for blood supplies and generators to keep their lights on.

The cause of the blast, which sparked fires, overturned cars and blew out windows and doors, was not immediately known.

Abbas Ibrahim, chief of Lebanese General Security, said it might have been caused by highly explosive material that was confiscated from a ship some time ago and stored at the port. Local television channel LBC said the material was sodium nitrate.

An Israeli government official said Israel “had nothing to do” with the blast. He spoke on condition of anonymity because he was not authorized to discuss the matter with the media. Israeli officials usually do not comment on “foreign reports.” 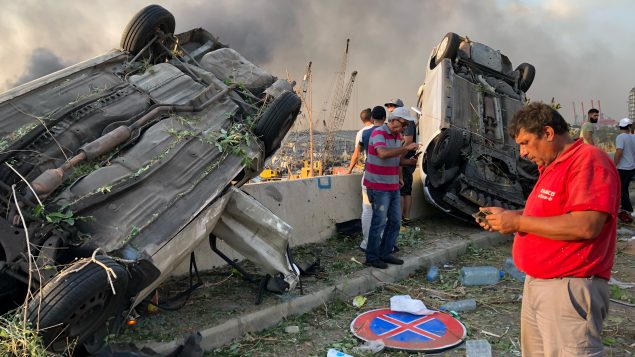 The blast was stunning even for a city that has seen civil war, suicide bombings and bombardment by Israel. It could be heard and felt as far away as Cyprus, more than 200 kilometers (180 miles) across the Mediterranean.

“It was a real horror show. I haven’t seen anything like that since the days of the (civil) war,” said Marwan Ramadan, who was about 500 meters from the port and was knocked off his feet by the force of the explosion.

Health Minister Hassan Hamad said the preliminary toll was at least 73 dead and more than 3,000 wounded. Emergency teams streamed in from across Lebanon to help, and injured had to be taken to hospitals outside the capital. 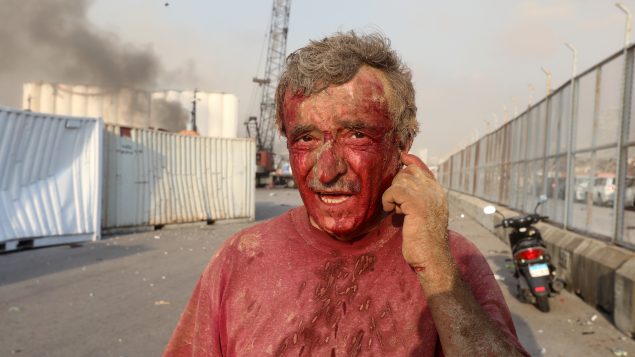 Champagne said Canada is closely monitoring the situation in Lebanon.

“Our hearts are with the victims and their families,” Champagne wrote on Twitter.

“We stand with the people of Lebanon and the diaspora during this difficult time and we are ready to assist however we can.”

Tragic news out of #Beirut today. Canada is closely monitoring the situation.

Our hearts are with the victims and their families.

We stand with the people of #Lebanon and the diaspora during this difficult time and we are ready to assist however we can.

Canadians in need of consular assistance can contact the Canadian embassy in Lebanon at +961 4 726 700 or call the federal Emergency Watch and Response Centre at +1 613 996 8885, or write an email to sos@international.gc.ca, officials at Global Affairs Canada said.

Officials with Global Affairs said they have not received any requests for consular assistance as of yet.

There are 10,960 Canadians in Lebanon who are registered in the Registration of Canadians Abroad (ROCA) database, according to Global Affairs. 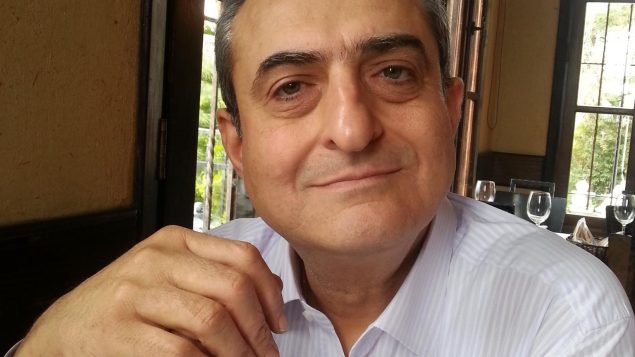 Nazar Najarian, secretary general of Christian Kataeb political party, was the first Canadian confirmed to have died in the explosion that rocked Beirut Tuesday. (Facebook)

Hours after the blast, several international media organizations reported that former Montreal businessman Nazar Najarian was among the victims of the explosion. His death was confirmed by family members. Najarian was the secretary general of a Lebanese political party called Christian Kataeb, also known as Phalanges.

The Lebanese-Armenian politician and businessman had moved back to Lebanon after spending several years in Canada. His Facebook page still listed Montreal as his city of residence.

According to a press release by Christian Kataeb party, Najarian was in his office in the Saifi district of Beirut when the explosion happened.