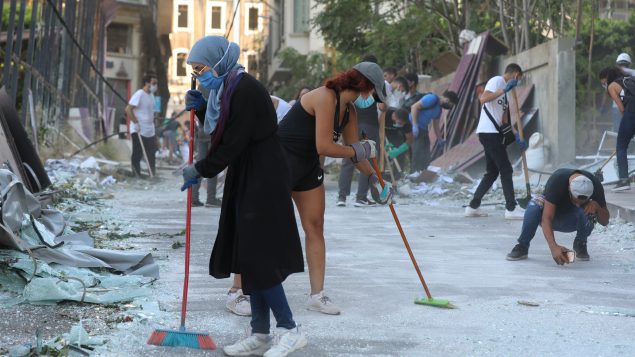 Of that sum, $1.5 million will go immediately to Lebanese and Canadian Red Cross to help meet urgent needs such as food, shelter and emergency medical services, Champagne tweeted Wednesday.

Following the tragic #BeirutExplosion, 🇨🇦 is providing an initial $5M in humanitarian assist. for the people of #Lebanon. $1.5M will go immediately to partners incl. @redcrossLebanon, via @redcrosscanada, to help meet urgent needs, like food, shelter & emergency medical services. pic.twitter.com/JKMvfvTlA1

Earlier in the day, International Development Minister Karina Gould said the federal was considering options for its humanitarian response “to ensure Canada’s assistance goes to where it’s most needed.”

Investigators probing the deadly blast focused on possible negligence in the storage of tons of a highly explosive fertilizer in a waterfront warehouse, while the government ordered the house arrest of several port officials.

International aid flights began to arrive as Lebanon’s leaders struggled to deal with the widespread damage and shocking aftermath of the explosion that flattened much of the port, damaging buildings across the Lebanese capital and sending a giant mushroom cloud into the sky.

Public anger mounted against the ruling elite that is being blamed for the chronic mismanagement and carelessness that led to the disaster. The Port of Beirut and customs office is notorious for being one of the most corrupt and lucrative institutions in Lebanon where various factions and politicians, including Hezbollah, hold sway. 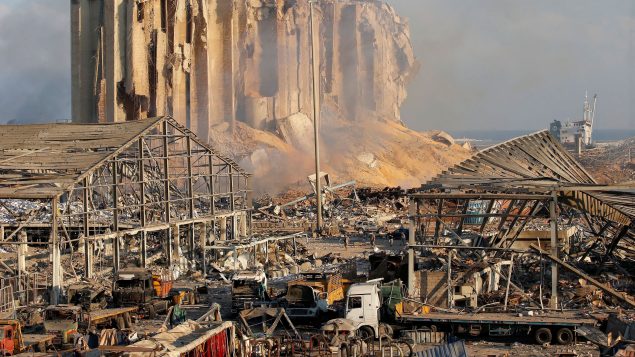 A general view shows the damage at the site of Tuesday’s blast in Beirut’s port area, Lebanon Aug. 5, 2020. (Mohamed Azakir/REUTERS)

The investigation is focusing on how 2,750 tons of ammonium nitrate, a highly explosive chemical used in fertilizers, came to be stored at the facility for six years, and why nothing was done about it.

Losses from the blast are estimated to be between $10 billion to $15 billion, Beirut Gov. Marwan Abboud told Saudi-owned TV station Al-Hadath, adding that nearly 300,000 people are homeless.

“Beirut as we know it is gone and people won’t be able to rebuild their lives,” Amy, a woman who swept glass from a small alley beside by a tall building that served as a showroom for a famous Lebanese designer and was a neighborhood landmark, told The Associated Press.

“This is hell. How are they (people) going to survive. What are they going to do?” she said, blaming officials for lack of responsibility and “stupidity.”

Lindsay Gladding of World Vision Canada said the deadly blast in Beirut could not have come at a worst time, as the country is in the midst of multiple humanitarian crises.

“World Vision is on the ground responding to urgent needs and we’re calling for humanitarian assistance, including from Canada, to support the most vulnerable girls and boys, ensuring they are supported, protected, and are given access to basic necessities,” Gladding said.

“Hospitals in Beirut have had their capacities stretched, especially over the last three weeks as sharp rises in new COVID-19 infections mount; there is significant concern of a swell in new infections as a result of this latest crisis.” 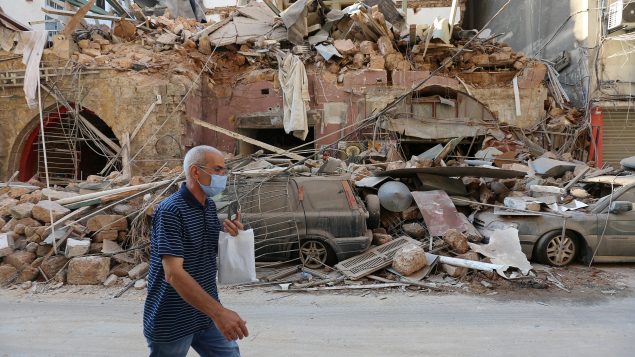 A man walks past damaged building and vehicles near the site of Tuesday’s blast in Beirut’s port area, Lebanon Aug. 5, 2020. (Aziz Taher/REUTERS)

The port area, where the blast occurred, is a key hub for bringing in and housing vital stocks including basic food supplies and fuel; without restored access, things will become life-threateningly difficult within weeks, she said.

“We know that many refugees and other vulnerable children and families are invisible to official services; they need medical assistance, help finding somewhere to live, and immediate supplies of food and water,” Gladding said.

“Without immediate international support, the lives of hundreds of thousands of vulnerable girls and boys will be severely impacted.”