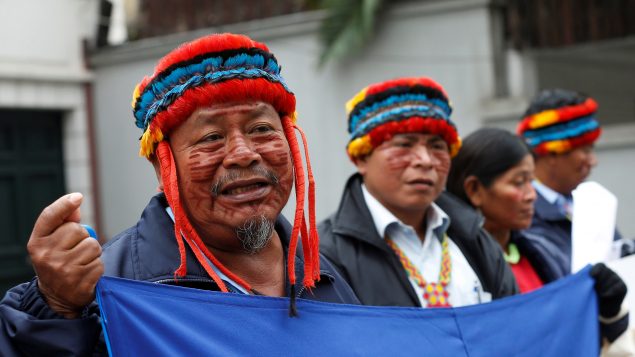 Peruvian indigenous people opposing an approved plan for oil drilling in Peru's Amazon, speak with the media during a protest in front of the offices of Geopark Ltd in Santiago, Chile on June 27, 2019. (Rodrigo Garrido/REUTERS)

Canadian oil company PetroTal says it has shut down work at its Bretana Oil Field in northeastern Peru following Sunday’s deadly clashes that took the lives of three Indigenous protesters and injured about a dozen people.

In a communique released Monday, the Calgary-based company said it had asked Peru’s National Police to beef up security at the facility in Peru’s Amazon region after protesters seeking greater government pandemic assistance took over another oil installation in the neighbouring region of Sarameriza.

The police dispatched about 40 officers to protect the Bretana site and “discourage any violence from the protesters,” the company said.

In the early hours of Sunday, Aug. 9, a group of Indigenous protesters clashed with police stationed to protect PetroTal’s installations, the company said.

Footage from security cameras obtained by Peru’s Canal N television news network shows dozens of protesters wielding what appears to be long sticks or spears clashing with police who respond by opening fire on the protesters.

“As a result, and during the ensuing struggle, about a dozen injuries amongst the police and protesters were reported,” PetroTal said in a press release.

Three of the injured protesters later died from their injuries, it added.

“PetroTal is cooperating fully with the authorities as they conduct their review of this unfortunate incident,” the company said.

The Peruvian government has dispatched a high level commission headed by Minister of Culture Alejandro Neyra to investigate the incident, Canal N reported.

The rights organization said the Indigenous protesters did not have firearms and were carrying only ancestral arms for cultural and traditional use. They were protesting against the lack of government and corporate aid in fighting the pandemic that has affected many of the Indigenous communities in the area, ORPIO said in a statement.

The clash happened just as UN High Commissioner for Human Rights Michelle Bachelet warned on Sunday that the COVID-19 pandemic poses a critical threat to Indigenous Peoples around the world.

More than 70,000 Indigenous people have been infected by COVID-19 in the Americas, including 23,000 members of 190 Indigenous Peoples in the Amazon basin, Bachelet said.

The pandemic has claimed the lives of over 1,000 people, including several elders with deep knowledge of ancestral traditions, she added.